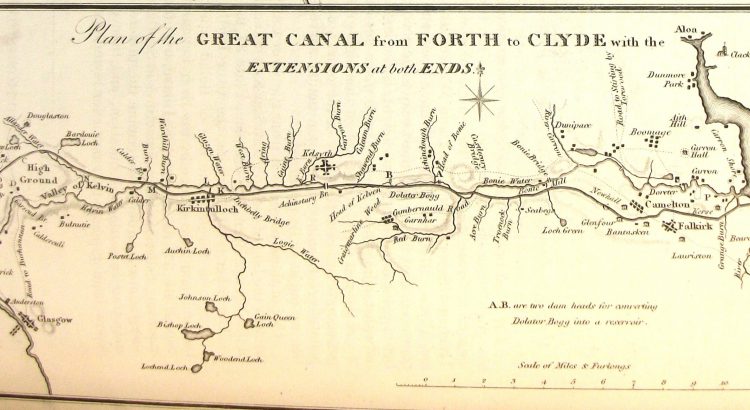 The Forth & Clyde Canal, which crosses Scotland from the Firth of Clyde in the west to the Firth of Forth in the east, was begun in 1768 and completed in 1790, and was the greatest engineering project that Scotland had undertaken to that time.  Professor Bishop gave the recent Scottish Local History Forum Annual Lecture at the National Library of Scotland, which explored the debate over the various proposed routes that the canal could take, and investigated some of the motives behind the proposals and their backers. Professor Bishop explains further :-

I started by explaining the word ‘rort’. I am an Australian by birth and upbringing and I came to Scotland permanently in 1998.  ‘Rort’ is a commonly-used Antipodean word, with the sense of playing the system to the edge of legality, working the system to your own benefit.  In the ‘rort’ part of the lecture, I explored whether John Glassford, the fabulously wealthy Glasgow tobacco merchant, had used the construction of the canal in slightly underhand ways, to his own financial benefit.  Glassford was certainly keen that the canal be constructed and he and a fellow Glasgow merchant, John Ritchie, contributed £24,000 to the £40,000 needed to get the Glasgow scheme for the canal up and running.  This website tells us that £24,000 in 1767 is equivalent to nearly £4 million pounds today – big money!  I think Ritchie was the lesser player and so Glassford was putting his hand in his pocket for a considerable sum of money to get a canal from the Clyde to the Forth.

Glassford’s motivation for supporting the canal would clearly have been to ease the movement of  tobacco to the east coast for onward shipping to mainland Europe, but I wondered if he had other motivations.  For example, John Smeaton’s original plan for the canal shows it passing quite close to Dougalston Estate near Milngavie.  Dougalston had considerable wealth in coal and limestone (for lime) as well as many farms, and Glassford purchased it in the same year as the canal was being planned.  Perfectly legal but I think it is reasonable to speculate that Glassford saw the potential to use the canal to ship minerals and agricultural produce from the estate.

Glassford also owned Netherwood, through which the canal was due to pass (and duly did).  Netherwood included the Dullatur Bog, which caused considerable problems for the canal construction team.  Construction was stopped when the bog yielded up the bodies of soldiers and horses that had become trapped in the bog in their flight from the Battle of Kilsyth in 1645.  As well as that hold-up, the canal structures kept sinking into the bog!  It was pretty awful land and of virtually no agricultural value, yet Glassford sold 35 acres of the bog to the Forth & Clyde Canal Company in 1771 for about £17 per acre (total sale value £599/18/-).  Unfortunately, there do not appear to be consolidated lists of land values/prices over time for Scotland but I have recently seen the following figures for sale of land on a north-eastern Scotland estate in 1814: arable (farming land producing a crop) 89p per acre, meadow (perhaps for hay cutting) 56p per acre, and hill land (probably for rough grazing) 6p per acre.  Another set of figures I have seen for land sales in the northeast in 1919-1920 averaged £1 per acre.  So, Glassford did extremely well out of the sale of 35 acres of difficult (and uncultivable) bog, but all perfectly legal – if the canal company was willing to pay £17 per acre for bog, then Glassford was perfectly within his rights to take it.

My main target, however, in asking whether Glassford was rorting the system relates to an inlet, a small side cut in the canal, as it passes though Netherwood.  On Robert Whitworth’s and John Laurie’s 1785 ‘Plan of the Great Canal’ in the National Library’s collection (Library shelfmark EMS.s.679 S), this short side cut is labelled “End of the cut from Mr Glassford’s Limeworks”, and sure enough, there are three lime kilns at the head of the cut.  ‘Aha’, I thought, ‘I bet Glassford had that cut to his lime kilns installed by the navvies and engineer when the canal was being dug.’  That is, I thought he was playing the system to get the workers to do a bit of work for him on the side (literally and figuratively) as they built the canal past that spot.  However, I then found a 1778 report from Andrew Wright on the Present State of Husbandry in Scotland (Library shelfmark M.41.d.[alpha]),  a report prepared for the Commissioners of the Annexed Estates, which had been forfeited to the Crown after the Jacobite Rebellion .  Wright reported:

“Thousands have heard of Mr Glassford’s great genius and abilities for trade, and of his high character in the commercial world … The ground [of Netherwood] was not to be improven by mere culture only, and inclosing, even although it were the very best.  It stood in need of manure … and a great abundance of it too.  He accordingly laid hold of the fortunate circumstance of the canal lately cut to Glasgow, and made a small one for himself, which communicates with the great canal, by which dung in abundance is brought from Glasgow, water-borne, to Netherwood. There is good lime-rock in the ground which is burnt into lime; and, by a proper use of these two capital manures, liberally bestowed, aided by good tillage … many fields are now like gardens.”

And so it seems clear that Glassford had himself had the side-cut built.  And the lime turned out profitable for the Netherwood owner, with Robert Belsches reporting in 1796 in his General View of Agriculture of County of Stirling (Library shelfmark  5.3651(17): “Farmers on the banks of the canal have the benefit of lime from the great lime-work at Netherwood, six miles west of Falkirk”.  Glassford played the system but in this regard he played the system legally and evidently did well out of it; he was not rorting the system.  So, my suspicions were not confirmed but the investigation has highlighted Glassford’s interest in minerals, which is yet another aspect of the commercial and business dealings of John Glassford, Tobacco Lord.