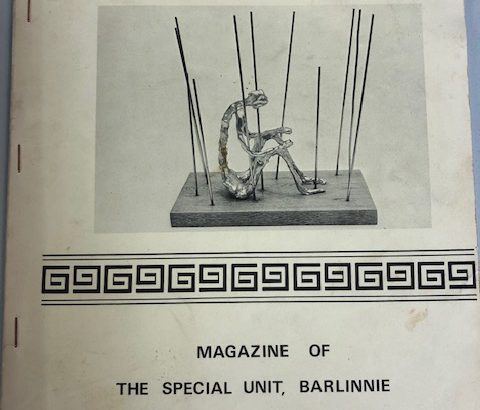 Is the purpose of prison rehabilitation, punishment or to remove dangerous people from society or a combination of all of these and more? How can prisons manage violent prisoners and minimise the danger they pose to themselves, staff and other prisoners? Can these violent prisoners ever be rehabilitated and reintegrated into society?

The Special Unit at Barlinnie Prison was set up in 1973 in the hope of finding answers to these questions. It aimed to address the problem of a small group of extremely violent prisoners who were considered unmanageable that included Jimmy Boyle and Larry Winters. Then and now the Special Unit polarised opinion. Its champions saw it as an inspired attempt to rehabilitate some of the most violent men in Scotland by using arts and therapy whilst creating a template for wider penal reform. Its detractors saw it as a liberal experiment too far with a lax regime that conceded too much authority to the prisoners.

We were recently delighted to add a donation of issue one of “The Key: magazine of the Special Unit, Barlinnie Unit” to our collections. The tellingly titled “The Key” contains writing, poetry and drawings by prisoners in the Unit and was distributed to the Unit’s supporters. It had originally been planned to distribute it to prisoners throughout Scotland but the Scottish Prisons Department vetoed this. Only three issues of “The Key” were published. The first, the one we received, was published in 1974. The third and final issue appeared in November 1975.

The Special Unit was a small therapeutic community of around ten prisoners with a focus on group and individual therapy and drug counselling. Joyce Laing an experienced art therapist was brought into the Unit and tried to get the men to express themselves via drawing, painting and sculpture and initially met with almost total disinterest. One day she decided just to sit down in the Unit and make a clay model of a head by herself. One prisoner joined in and on her next visit she found several sculptures including a piece that captured her attention called “Solitary”. This featured a contemplative stick like figure hemmed in by rod wires and was the work of Jimmy Boyle. “Solitary” appears on the front cover of issue one of “The Key”. After this breakthrough many of the men started to sculpt.

“The Key” issue one has 32 typed pages and begins with an editorial that outlines the thinking behind the magazine “The editorial policy of “The Key” is based on the principle that if an article stimulates thought – publish!” The first article is an interview with Father Anthony Ross a clergyman that asks him for his views on the Unit and penal reform and this is followed by an article on the history and philosophy behind the unit. The bulk of the magazine though consists of poems, stories and semi-autobiographical pieces by the prisoners who are identified by their initials not their full names.

We can assume that the J.B. that wrote the piece called “Sculpture” is Jimmy Boyle. The article starts “It would be difficult for the reader to appreciate how astonished I am to find myself writing on the subject of art”. Boyle then reflects on his experience of imprisonment “During my past seven years of incarceration my environment has offered me nothing and I have reciprocated in like fashion. During this period the emphasis has been on destruction both on a physical and mental level.” In sculpture Boyle found something to occupy his mind and body and take him out of a destructive downward spiral of violence. Over a period of eight months he dedicated himself to the study of anatomy and classical sculpture. The piece is illustrated with photographs of his work including a bust of Larry who Boyle says is “known as an extremely violent person to the ‘screws’”.

Larry is Larry Winters who contributes an autobiographical piece called “Conflict” to “The Key”. It tells the violent story of his time in prison. He started a life sentence for murder in 1964. In January 1965 Winters assaulted a Peterhead prison officer and five years were added to his sentence. In 1966 he assaulted another prison officer and was placed in solitary confinement. In 1968 he assaulted three prison officers and a civilian tailor and was sentenced to an additional fifteen years. His violent behaviour continued and indeed escalated and as a result he spent nearly half of his time in prison in solitary. In the Special Unit Winters began to relate to prison officers as human beings and not just through violence. He writes of his plans to start an Open University course and to take up oil painting.

The last page of the magazine is comprised of short statements under the heading “Thinking time”. Prison is described as “A system geared to destroying the offenders individuality and creating a model prisoner, this is a far cry from creating a good citizen”. Another contribution is “Crime is a social illness; prison should be a social treatment”.

An anonymous article addresses the ideas that led to the creation of the Unit and makes clear that it aims to change the views and behaviour of both prisoners and staff. “The time has come for the prison service to stop and take a look at itself, staff must come from behind their uniforms and we would suggest that authority has not diminished but has in fact increased.” Two later sentences summarise the thinking behind the Unit. “Our experience has shown that if a person is treated in a decent, humane manner then he will reciprocate in like fashion. The aims of the unit will follow the official line whereby the inmates are helped to become better CITIZENS and not better PRISONERS.”

The Special Unit existed between 1973 and 1994. It was both a lightning rod for controversy, the subject of dozens of alarmist stories and comment pieces in newspapers, and an internationally famous experiment in rehabilitation much studied and copied. The fate of probably its two most famous inmates Jimmy Boyle and Larry Winters illustrates both the success and problems of the Unit. Jimmy Boyle was released from prison on 26 October 1981 and moved to Edinburgh where he set up a charity for ex-offenders and recovering drug addicts and also established himself as an acclaimed artist and writer. Larry Winters died in Barlinnie in 1977 at the age of 34 of a drug overdose seemingly overwhelmed by his demons which he had begun to understand but could not control.

“The Key” was donated to us by a former Edinburgh journalist now enjoying a happy retirement in Polmont. Over the course of his career he had built up a collection of first, last and special issues of newspapers and magazines. “The Key” was only one of several titles he donated to us.Others include “Yes” a newspaper for teenagers published by the Church of Scotland in 1978; “Ypres Times” published in October 1926 and “Ocean Times” a newspaper published on board the Queen Mary in 1938. Donations play an important part in helping us build the national printed collections. We are keen to add issues 2 and 3 of “The Key” to our collections so if you happen to have copies please get in touch.