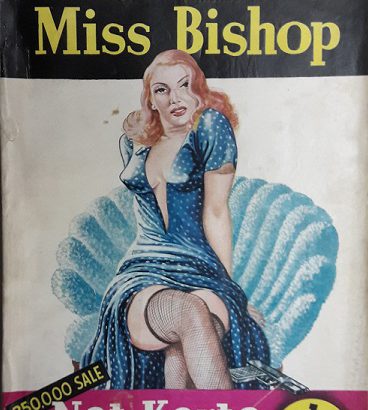 In 1949 a series of pulp thrillers by Nat Karta started to be published by a small Glasgow publisher called Muir-Watson. In grey post-war Britain a big appetite existed for American hard-boiled fiction with its gangsters, cynical detectives and glamorous femme fatales that could not be met by American imports. John Watson a then fairly low ranking journalist at the Glasgow Herald decided to fill this gap and hopefully make himself a little money at the same time.

Watson had served as a Flight Lieutenant in the RAF during World War II. After the War he returned to the Glasgow Herald where he had previously trained as a journalist. He also launched a high-minded magazine called “The Glasgow Review” which covered the culture and politics of post-World War II Scotland. The magazine failed and Watson who had a wife and child to support lost quite a lot of money. For his next publishing venture Watson aimed a bit more downmarket and found himself with a hit.

The first Nat Karta book was called “The Merry virgin” and set up a template that subsequent novels would follow. A suggestive title and a cover illustration featuring a young woman who looked likely to quickly lose the few clothes she still had on. Sadly we don’t yet have a copy of “The Merry virgin” but we do have “Bravely to bed” ; “Mind my innocence” ; “Dame called desire” and “Once bitten, twice bitten”. A blurb on the back promised a lot more than the book delivered, the blurb for “The sin of Miss Bishop” from 1951 is typical.

“Every so often in an author’s writing life he seems to touch on some nerve of his material that gives his work a special tension. In his new book Karta’s done just that. Fiery with all the molten passion of white-hot steel he brings his British public a novel as tempestuously exciting as the sight of a half dressed gypsy girl dancing in the dark before an open fire. Karta at his very best, it’s a reading must”.

The inside front cover features a photograph of the author, a man with his back to the camera smoking a pipe and more purple prose about the book. In the case of “The sin of Miss Bishop” it says “It’s a story that tears at the very vital of life ; it lifts you to heights of screaming passion, and carries you from first to last page on a torrent of action that is as thrilling as the climatic movement of a great symphony or the kiss of a beautiful woman”.

Nat Karta was a big success and soon they were publishing a new title every month. Watson wrote the early titles but soon had to bring in others, including colleagues from the Glasgow Herald, in order to keep up with demand. As well as Nat Karta books were published as by the equally exotic sounding house authors Hans Vogel and Hyman Zore. Some of the books claim sales of 250,000 on the cover and it is likely that Muir-Watson sold millions of books.

In 1952 Watson sold the rights to Nat Karta to an English firm. It was perhaps getting a little hot for the small Glasgow publisher. A similar series published in England under the pseudonym of Hank Janson was unsuccessfully prosecuted in 1954. Prior to the Lady Chatterley trial in 1960 the risk of prosecution for obscenity loomed large for those publishing “racy” material.

In Richard Hoggart’s classic 1957 book about working class culture “The uses of literacy” the Nat Karta books would have fallen into the category Hoggart calls “blood-and-guts sex novelettes”. If you were looking for the latest Nat Karta novel you would not have gone to the High Street to James Thin or John Smiths Bookshop who would almost certainly not have stocked them. They would have been purchased from a back street magazine shop or railway-bookstall. The fact that they were distributed outside the mainstream book trade perhaps explains why the National Library of Scotland did not receive these when they were published. They would also have been regarded as ephemeral publications with no lasting cultural significance. This was long before you could study popular culture or media studies at University.

You can read more about Nat Karta and other British pulp fiction of the period in “The mushroom jungle : a history of postwar paperback publishing” by Stephen Holland published in 1993 and available at the Library.

You can also find out what is “The sin of Miss Bishop”. Here are the opening lines from the novel.

“Miss Nina Bishop stood by the side of her private swimming pool. She was twenty-three, wealthy, and very beautiful. Her hair was black and her eyes blue. She had a straight nose and very level black brows.

Also, her mouth was passionate and she was a virgin”