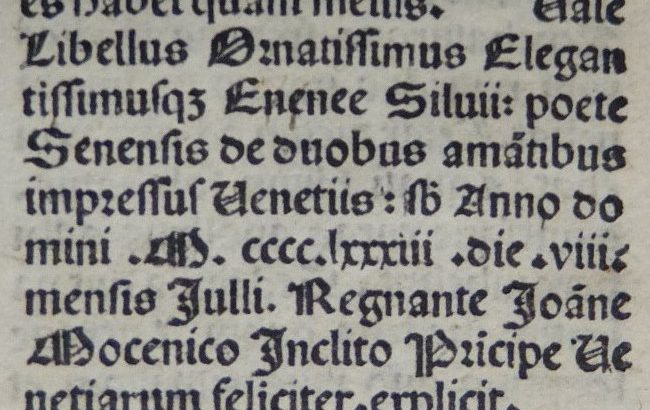 One of the most popular works of the 15th century was written by the man born Enea Silvio Bartolomeo Piccolomini on 18 October 1405 in the village of Corsignano (now Pienza in Tuscany). By the 1430s he was acting as secretary to bishops and cardinals and in 1435 he was sent by Cardinal Albergati on a diplomatic mission to Scotland where he met with James I. His passage to Scotland must have been a rough one as he swore to give thanks at the nearest shrine of Our Lady once safely on dry land. To fulfil his oath he had to walk 8 miles from Dunbar to Whitekirk: a journey through snow that left him with pain in his legs for the rest of his life.

Piccolomini continued his diplomatic career but found time in 1444 to write Historia de duobus amantibus (The tale of two lovers) which circulated in manuscript and was first printed in Cologne by Ulrich Zell between 1467 and 1470. Set in Siena, the novel describes the love between the married Lucretia and Euryalus, a courtier of the Duke of Austria. They fall in love but to begin with are unaware that their feelings are mutual. They then begin a correspondence which takes up much of the rest of the novel. Piccolomini was no stranger to love having fathered children in Scotland and England. However, in December 1456 he became a Cardinal and by this time had put his adventurous life and erotic writings behind him. He was crowned Pope Pius II on 3 September 1458 and died on 14 August 1464.

The copy of Historia de duobus amantibus held by the National Library was printed in Venice by Bernardino Stagnino in 1483 and is one of only two copies recorded in Britain, the other being at the British Library. The provenance of the book is unknown until it came into the possession of Hartwell de la Garde Grissell (1839-1907) who converted to Catholicism in 1868 and who moved to Rome the following

year to be Chamberlain of Honour to Pope Pius IX. While in Rome he acquired a huge amount of holy relics and it is perhaps also where he came into possession of the Historia.

The book was sold to the National Library by the Oxford bookseller Albi Rosenthal and was accessioned on 20 July 1943. Despite the austerity of the war years, the Library’s Keeper of Printed Books, William Beattie, was able to continue to purchase books for the collection. This was thanks to the Reid Fund, bequeathed by Mr and Mrs Reid of Lauriston Castle, and Beattie bought 32 15th-century books in 1943 alone.

This page has more about Pius II and a translation into English of the Historia.