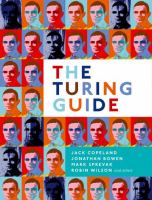 The work of Alan Turing continues to be of huge significance to all of our lives over 100 years since his birth. Any new works on Turing are an exciting addition to the collections of the library. “The Turing Guide” stands out with its extensive coverage of Turing’s life and works, written in a highly readable way.

The book is written by the leading experts on this remarkable man. Eleven chapters alone are dedicated to the work of Turing in Bletchley Park as a code-breaker. The work is highly detailed and fascinating. It is convincingly argued that Turing’s work in cracking the Enigma U-boat code played a significant role in shortening, if not winning the war for the Allies.

The contribution made by Turing in inventing the modern computer is also given extensive coverage. It is noted that as early as 1936 he was describing the basic logical principles of the computer and was the first to do this. His post-war work designing hardware and software is explained to the reader, including the unusual techniques he used to do this. Almost unbelievably, Turing also predicted artificial intelligence and its use in the future.

Every angle of Turing’s life is covered but there are many lesser-known facts, such as that Alan Turing was so good at running, he was nearly part of the Great British Olympic squad in 1935. It was only a leg injury that prevented this. With contributions by contemporaries and those who have studied Turing and his works for decades, this work is full of further insights into Turing like these.

You can find further details of The Turing Guide on our Main Catalogue.