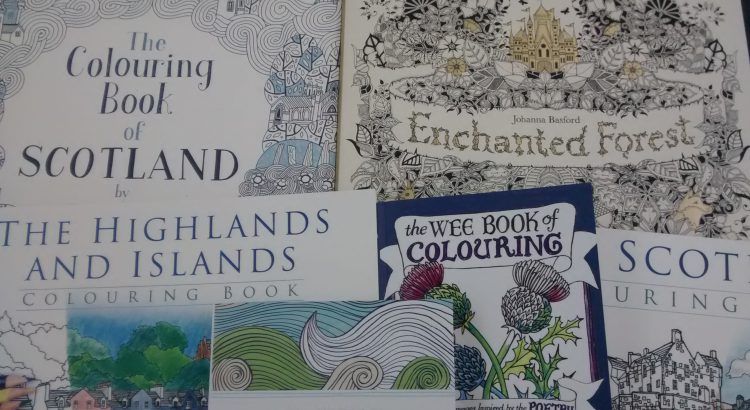 As well as being a repository of knowledge the National Library of Scotland is an archive of publishing trends and fashions. You might remember the Magic Eye books of the mid 1990s? If you squinted at an image in these books in the right way a 3D landscape would open up before your eyes as if by ‘magic’. In 1997 the Japanese number placement puzzle Sudoko was first published in Britain in the Times newspaper. Almost overnight the nation went Sudoko crazy and publishers started to issue Sudoko collections. We have Magic Eye and Sudoko books in the Library

Although these books are largely text free and do not contain knowledge in the generally accepted meaning of the term we collected them, receiving them via our Legal Deposit entitlement. You can come in and squint at our Magic Eye books and look at but not solve our Sudoko books.

“Secret Garden” was inspired by the flora and fauna around her parent’s fish farm and the gardens of Brodick Castle on Arran where her grandfather was head gardener. The wild forests of Arran and its highest mountain Goatfell inspired her next book “Enchanted Forest”.

The books are a chance to escape from our busy screen dominated lifestyles to an analogue world. All the images in the books are hand drawn by Basford using ink and are not computer generated. It is though arguably the digital world of social media that is responsible for much of their success via tweets, Facebook and Instagram.

The reason for the book’s success and all the social media activity they inspire though is the intricate and highly original illustrations by Johanna Basford inspired by Escher, tattoos, street art, fashion and the landscapes and plants of Arran and Aberdeenshire. A graduate of Duncan of Jordanstone College of Art and Design in Dundee where she has also had an exhibition at Dundee Contemporary Arts “Wonderland”, we have the exhibition catalogue in the collections, Basford has drawn on her background, interests and talent to create a world that has captivated millions.

As our copies won’t be coloured in the original black and white illustrations will be available to admire and inspire in the National Library of Scotland now and in the future. As will a range of other adult colouring books including some on Scottish themes.