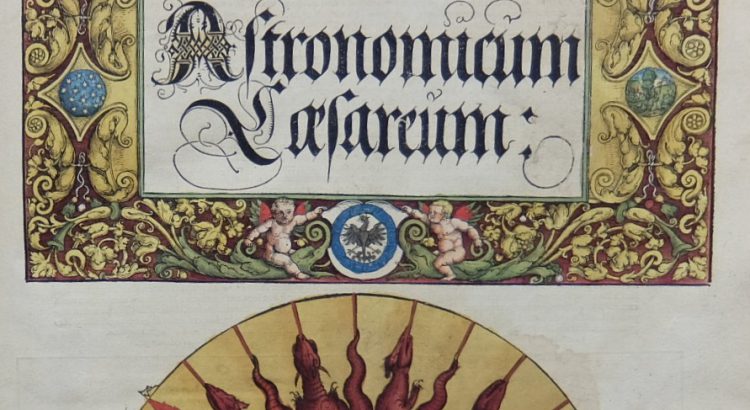 Peter Apian’s Astronomicum Caesareum (Ingolstadt, 1540) is one of the finest printed books in the National Library of Scotland, hand coloured throughout and featuring ingenious and beautiful volvelles.

Apian, humanist mathematician and astronomer and born Bienewitz in Leisnig, Saxony (Biene is German for bee, hence the Latinizing of his name to Apian), was the son of a prosperous shoemaker and studied in Vienna, Regensburg and Landshut where he produced his Cosmographicus liber (1524), a highly respected work on astronomy and navigation which was to see at least 30 reprints in 14 languages and that remained popular until the end of the 16th century. In 1527 he was called to the University of Ingolstadt as a mathematician and printer and by the 1530s had secured the patronage of the Holy Roman Emperor Charles V. Apian’s purpose in writing Astronomicum Caesareum was to explain astronomy without recourse to the complicated mathematics involved: particularly for his patron Charles and his brother King Ferdinand to whom the book was dedicated and for whom it was named. The book took approximately 8 years to produce: from the issue of the patent in 1532 to the colophon dated 1540. The main contemporary use of the book would have been to cast horoscopes.

The book uses volvelles as a way to represent the functions of the astrolabe, an instrument used to take astronomical measurements. The volvelles contain as many as five independently rotatable paper dials that can be used to measure astronomical movement. The silk strings provide fiducial lines (a line assumed as a fixed base for comparison) and the strings are threaded with pearls to mark a point on the line. The volvelles and supporting tables can be used to calculate eclipses and Apian devotes 2 chapters to the correction of historical dates by reference to these phenomena. The book is based on Ptolemy’s geocentric model of the solar system which would begin to be overtaken just 3 years after the book’s publication when Copernicus published his De revolutionibus orbium coelestium, promoting the heliocentric model. The Library’s copy is part of the Newbattle Collection that was bequeathed to the Library by Philip Henry Kerr, 11th Marquess of Lothian (1882-1940), and acquired in 1950. The book bears early provenance of Albrecht V, Duke of Bavaria (1528-1579) who was educated at Ingolstadt, was a patron of Apian and who presented many copies, in this case to Wolfgang Bosch whose bookplate is on the back pastedown. Bosch may be, or be connected to, the Wolfgang Bosch who was mayor of Ljubljana, Slovenia from 1520-1524 and whose arms (which match the crest on the bookplate) dated 1528 are set into his house at Fish Square, Ljubljana.