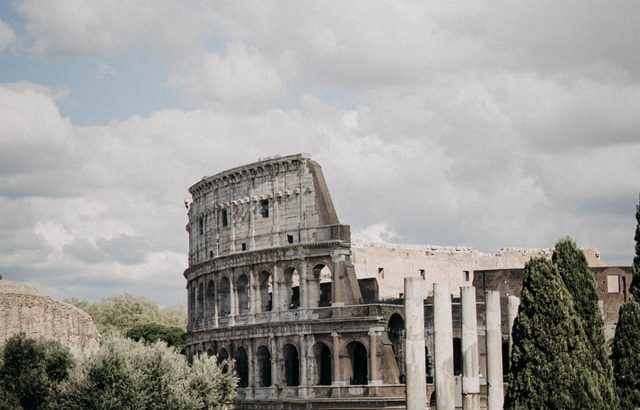 Read or download this book from the Lewis Grassic Gibbon page on our digital gallery http://digital.nls.uk/lewis-grassic-gibbon-books/archive/205174226 where you will find this novel alongside the other books James Leslie Mitchell published during his lifetime both under his birth name and his famous pen name Lewis Grassic Gibbon.

Welcome to the latest of our fortnightly series introducing some favourites from our collections for you to enjoy reading, all freely available online.

The best introduction to this novel is perhaps the author’s own, the first one sentence paragraph of “Spartacus”

“When Kleon heard the news from Capua he rose early one morning, being a literatus and unchained, crept to the room of his Master, stabbed him in the throat, mutilated that Master’s body even as his own had been mutilated : and so fled from Rome with a stained dagger in his sleeve and a copy of “The Republic” of Plato hidden in his breast.”

In this short paragraph Mitchell does a lot of things. It shows what a skilled writer Mitchell was as we are immediately taken straight into the world he has created. You want to read on and perhaps the best thing to do now is to follow the above link and do just that. It also shows the breadth of Mitchell’s talent. He is unfairly often regarded as a one book writer and that book is his famous “Scots Quair” trilogy the classic first volume of which is “Sunset Song” (1932) set in the rural north east of Scotland where Mitchell was born. His portrait of the slave revolt of 73 BC in “Spartacus” is as vivid as his portrayal of farm life in the Mearns in “Sunset Song”.

The ancient world has long been a popular setting for novels. Mitchell was a great admirer of Edinburgh born Naomi Mitchison and her debut novel “The Conquered” (1923) which was set against the background of the Gallic Wars of Julius Caesar and he corresponded with her whilst writing “Spartacus”. More recently Scottish writers Allan Massie, Ross Leckie and Gordon Doherty have written novels set in Ancient Rome. It also provided a subject for many classic works of 20th century literature including “I Claudius” by Robert Graves and “The Eagle of the Ninth” by Rosemary Sutcliff and in the 21st century Robert Harris has used ancient Rome as the setting for a series of bestselling novels.

Mitchell’s book differs from these works by not taking us into the minds and lives of the Romans. “Spartacus” is a book set in Rome which focuses almost wholly on the lives of slaves or former slaves. Kleon’s “Master” in the opening paragraph is not named and throughout the novel Romans are identified by their rank and position, the oppressors are not humanized. Mitchell’s novel is told from the point of view of the oppressed and the underdog not the masters which makes it feel very modern. In this it differs from the most famous 20th century versions of the story of Spartacus, Howard Fast’s novel “Spartacus” (1951) and the 1960 Stanley Kubrick film based on it both of which are told in part from the viewpoint of the Roman ruling class.

One thing that Mitchell’s “Spartacus” shares with Fast’s novel and Kubrick’s film is that they are political works. Fast’s novel was written during the McCarthy era in the United States as a reaction to his imprisonment for refusing to name contributors to a fund to set up a home for orphans of American veterans of the Spanish Civil War. Kubrick’s film was scripted by Dalton Trumbo who had been blacklisted by Hollywood for his refusal to testify before the House Un-American Activities Committee. In Kubrick’s film the famous “I am Spartacus” scene not only shows the solidarity of the slaves but also acts as a metaphor for the solidarity shown by the people who refused to implicate others during the McCarthy era. James Leslie Mitchell self-described as a Marxist anarchist and had been politically active in Glasgow in the 1910s during the period known as Red Clydeside and witnessed the General Strike in London in 1926. He would have been aware of the Spartacus League founded in Germany by Rosa Luxembourg and others in 1914 and that Spartacus had long been regarded as a hero by the left. The novel is an outlet for Mitchell’s beliefs about freedom and revolution. Mitchell would return to similar themes in “Grey Granite” (1934) the third volume in his “Scots Quair” trilogy. In this novel Chris Guthrie’s son Ewan organises a strike at a metal works and is arrested and beaten up by the police, a similar story to Spartacus but this time with a 20th century Scottish urban setting.

For “Spartacus” Mitchell draws on the works of Appia, Plutarch and Sallust to give a vivid and detailed portrayal of ancient Italy, but all this information is seamlessly integrated into a linear and compelling story. Mitchell’s portrayal of Spartacus himself is remarkable. Through dialogue with other characters in the novel such as Kleon we see him develop morally and politically. We first encounter him as a wild mercenary figure who in a rage kills another gladiator. By the end of the novel he has plausibly developed into a larger than life and charismatic freedom fighter, aggressive but imbued with a deep humanity.

Whilst Lewis Grassic Gibbon is almost certainly the most widely read and beloved Scottish novelist of the 1930s the books he published as James Leslie Mitchell are ironically amongst the most neglected Scottish novels from that period. Taken together “Sunset Song” (1932) and “Spartacus” (1933) show the range and depth of talent of this remarkable writer.