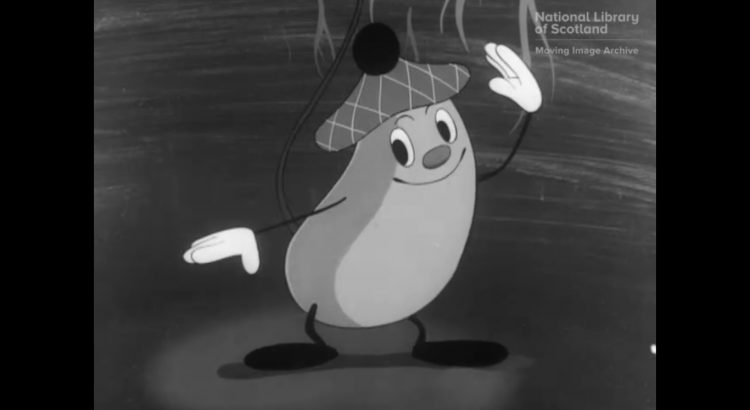 Today commercial potato crops are usually gathered by machines but, in the past, the job of lifting potatoes from the soil was done by hand. The Scottish potato harvest once employed thousands of men and women (often migrant workers from Ireland) – known as the tattie howkers. Earlies (such as Ayrshire new potatoes) were harvested in June and other crops in October. The October school holidays were known as the tattie holidays as children were permitted time off school to help gather the potato harvest.

After the Second World War, there was a shortage of farm workers at a time when crop supply was increasing. The Women’s Land Army was reduced in number and there was no longer the labour provided by prisoners of war. Migrant labour from Ireland had reached standstill.[i]

In 1946 the Education (Scotland Act) debarred school children under the age of 13 from seasonal employment[ii] but by 1948 extensive recruiting had begun for children above that age group to assist with gathering the potato harvest.

A parliamentary committee was set up in 1949 under the oversight of Sir Garnet Wilson (former Lord Provost of Dundee) to investigate the supply of harvest labour. The first meeting took place in February of that year. Early on (interim report, July 1949) the committee recommended that school children would be needed for potato lifting for some years to come and education authorities, teachers and parents were asked to assist with making this a reality.[iii]

The cooperation of the education authorities was especially important as teachers were required to supervise the children for the duration of the harvest – which could last between three and five weeks. In 1947, Glasgow had warned that they would not participate due to the withdrawal of transport and lodgings from the offer. Only once the Secretary of State for Scotland met their requests did Glasgow’s education authority agree to assist. Children were paid a minimum of 1s per hour and guaranteed at least 25s per week if staying in hostels (of which 16s was deducted for food and lodgings).[iv]

We know from the Department of Agriculture Scotland reports that in the years 1949–50 and 1950–51, a ‘vigorous publicity campaign’ took place in the press, on the radio and in cinemas. Recruitment centres were set up in Edinburgh and Glasgow and three ‘trailers’ were shown in Scottish movie theatres.[v] I have a suspicion that the short film Potato Picking Trailer (c1950)[https://movingimage.nls.uk/film/1058 ], which we preserve at the National Library of Scotland Moving Image Archive, was one of these. But, in truth, we don’t yet know for certain when this charming promotional film was produced. I haven’t been able to locate any record of the animation being commissioned. What we do have evidence for is that, in the years 1949–1951, the government employed a number of film companies and amongst those listed were Halas and Batchelor Cartoon Films Ltd, who (for reasons I outline below) almost certainly made the animation.[vi]

A clue to the production year might be in the quoted figure of “50,000 school children” within the film itself. In 1949 there were indeed 50,000 children recruited to gather potatoes and, in 1950, just under that number. Was 50,000 the setting of a target or was this number being used as a guideline based on what had been achieved earlier? In April 1950, after 14 months of meetings and consultation, the Committee on Harvest Labour issued its report, which stated 54,000 children would be needed. This number was often rounded down in the press to 50,000 or ‘over 50,000’. [vii] Had the newspaper editors seen the trailer or was the trailer’s message enforcing what people had already read in the press?

The Potato Picking Trailer carries with it the legacy of wartime public information films.  It is direct with its message and memorable in its apparent simplicity. But the war had ended and people were again looking to the future. Despite the film’s upbeat ending, there was increasing discontent at the time around the idea of children being removed from school to work. Concerns were voiced, often by teachers, that children (especially boys who attended junior secondary schools and were considered less academic) were being left behind because they were missing weeks of education. During the harvest, the children who still attended school were taught in mixed-age, mixed-ability classrooms, often by probationary teachers. These settings were described as ‘chaotic’.[viii] With class sizes reaching 40 the rest of the year, teachers said there was no hope they could spend extra time getting the children who had been tattie howkin’ back up to speed.[ix]

The publication of the Report on Harvest Labour was followed by strong opposition to child recruitment by members of the Educational Institute of Scotland who believed the practice disturbed children’s education.[x] In 1950, only 32 out of 6,000 teachers in Glasgow volunteered to help supervise the children.[xi] As time went on, fewer teachers volunteered to accompany the children to the farms to help with their supervision and other adults had to step in.

In 1959 the Government said 1962 would be the last harvest that would see children let off school.[xii] Harvest labour was becoming increasingly mechanised as demonstrated in Automatic Potato Harvester (1963) [ https://movingimage.nls.uk/film/0304 ]. Despite this, children continued to help gather potatoes in Scotland while on holiday until the 1980s and, perhaps surprisingly given the often cold and back-breaking work, many have fond memories of doing so.

The one-minute animation Potato Picking Trailer is a favourite in our collection amongst school children and adults alike. In the film, anthropomorphic potatoes are seen ‘imprisoned’ in the soil. A sporran-wearing spud sends out an S.O.S signal by telegram, calling for 50,000 school children to rescue them. Their call is answered by an army of small wellie boots accompanied by jaunty, Scottish music.

During the Second World War, and for a while after, animation was frequently used in public information and propaganda films. Animation spoke to the whole public and was an attention-grabbing addition to a cinema programme or newsreel. One of the British animation studios most frequently employed by the government in this period was Halas & Batchelor studios. Halas & Batchelor became one of the biggest and most respected animation studios in Europe. You might be familiar with their feature film adaptation of Orwell’s Animal Farm (1954) in which the animals take on human characteristics. Many of their information and advertising films contained objects as characters, such as in Dustbin Parade (1941) [ https://www.halasandbatchelor.co.uk/filmography-1938-47 ] and Cold Comfort (1944) [ https://player.bfi.org.uk/free/film/watch-cold-comfort-1944-online ].

Potato Picking Trailer came to us in 1980 from the Scottish Record Office (now called National Records of Scotland) alongside Tattie Howkin (1951). The work is unattributed to an animation studio or artist, but I had noticed visual similarities between it and the Charley films (1946–48) made by Halas and Batchelor, which launched the new post-war Social Security plans. You can watch some Charley films on the Halas & Batchelor website ( https://www.halasandbatchelor.co.uk/  ) and on the BFI Player (https://admin.player.bfi.org.uk/ ).

In 2019 I wrote to Vivien Halas, daughter of John Halas and Joy Batchelor. Vivien is the curator of the Halas & Batchelor Collection, the archive of which is preserved by the British Film Institute. She replied saying that she was not familiar with our potato trailer. However, she wrote “This film certainly has the look of Halas & Batchelor and the style of my mother’s drawings. The music and voice over also indicate a Halas & Batchelor production.”

Joy Batchelor’s drawings were used in several cookbooks around the same time that Potato Picking Trailer was released (and at a point when Animal Farm was being made). These contained simple line drawings of friendly character food items and household objects. A number of the illustrations are strikingly similar in style to those in Compost Heap, Filling the Gap and Potato Picking Trailer. Now out of print, these books are in the National Library of Scotland for consultation in person:

Goaman, Muriel Anyone Can Cook London, 1952

By following the visual clues, the mystery of who created our imprisoned potatoes has been solved. The film was undoubtedly authored by Joy Batchelor and produced by the Halas & Batchelor team.

Potato Picking Trailer was originally dated 1951 (to match Tattie Howkin’). The production year we have newly assigned to the film is c.1950, the year that Garnet Wilson’s report was published. This matches the information held by British Pathé (who also have a copy of this film). Their record states that the trailer was released as part of a Glasgow newsreel in August 1950.[xiii] It is possible, however, that the film was initially made in 1949 for the national recruitment campaign and then used in targeted, regional campaigns later. Certainly, the animation would have made a refreshing change from the documentary-style campaign films which were more commonplace (you can find a wider range of potato picking campaign films on the British Pathé website).

It has been exciting to uncover some of the background to this special film which we are fortunate to preserve in our national collection. Questions remain around how the commissioning process worked and what discussions went on about the content (for example, adding a Scottish flavour to the potatoes by dressing them in sporrans and Tam O’ Shanters, the choice of ‘The Campbells are Coming’ music and the voices provided by Molly Weir and an actor who we have yet to identify). When circumstances allow, I might yet make it to the Halas & Batchelor archive at the BFI to do some further… digging?

[i] Agriculture in Scotland: The Report of the Department of Agriculture for Scotland for 1948 (1949) p48. You can watch footage of German prisoners working on a Scottish farm in ‘Clean Farming’ (1946) https://movingimage.nls.uk/film/4288

[iii] Agriculture in Scotland: The Report of the Department of Agriculture for Scotland for 1949 (1950) p63

A note on references: Research for this article was conducted in 2019-2020. The article was written in May 2020 during the Covid-19 lockdown. As I was unable to access a number of subscription-only sources in writing this article I have relied heavily on The Scotsman archive, which I was able to access through the National Library of Scotland website. For ease of retrieval, I have maintained the original format for these references in the endnotes.