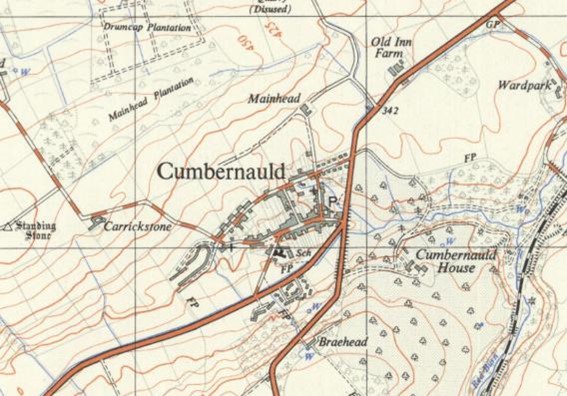 Collated by Charlotte James Robertson.
North Lanarkshire borders the northeast of the City of Glasgow and contains many of Glasgow’s commuter towns. The South of the county has its roots in the historic county of Lanarkshire, which has existed since the time of King David I, ruler of Scotland from 1124 to 1153. In the 18th century the county’s towns, including Motherwell, were active in textile production. The discovery of coal and iron ore in the 19th century, as well as the building of the Glasgow to Edinburgh railway, saw the region develop rapidly.

The largest town is now Cumbernauld which was the site chosen for one of the ‘New Towns’ built in Scotland to cope with demand for housing after the Second World War and the ‘overspill’ from densely populated areas of Glasgow. The area is characterised by rapid change and transformation.

Book – fiction:
The Young Team by Graeme Armstrong, 2020. Written by North Lanarkshire born Graeme Armstrong, this recent book draws on life experience to tell the story of a teenage boy named Azzy growing up within the ‘young team’ culture of Airdrie. https://search.nls.uk/permalink/f/19q5vbt/44NLS_NPLD_EBK019723142

The drowned village, by Clara Glynn, 2000. An account of the last few years in the Lanarkshire mining village of Bothwellhaugh, from oral testimony of former inhabitants. It is based on film shot by villager Joe Griffiths between 1962 and 1965 prior to the clearance and demolition of the village to create Strathclyde Country Park and loch.
https://movingimage-onsite.nls.uk/film/3722

An e-resource:
In the early 20th century, thousands of Lithuanians came to live in Scotland and there was a significant Lithuanian community in Coatbridge and Bellshill. As can be seen from this article in The Scotsman from 1900, some Lithuanian people found work in coal mining, but they were not always made welcome and were sometimes mistakenly referred to as ‘Poles’.

Industry:
Lines on the terrific explosion at Moss End, 1863.
This poem is about an accident that took place at Mossend ironworks, North Lanarkshire on Wednesday 8th April, 1863. At least 7 people were killed and many more injured when one of the boilers overheated and exploded.
https://digital.nls.uk/broadsides/view/?id=14834

Unique writing boards, 1980. An overview of the development of the blackboard and its manufacturing process at the Wilson and Garden factory, based in Kilsyth.
https://movingimage-onsite.nls.uk/film/5914

A person:
Ethel MacDonald, was born in Bellshill in 1909. MacDonald was an envoy for the anarchist federation during the Spanish Civil War. She made broadcasts on the Barcelona Anarchist radio station, sending dispatches and broadcasts back from the Spanish Anarchist camp in Barcelona to the UK. She was secretary to English anarchist Guy Aldred and worked with him on several Glasgow based anarchist periodicals.

The National Library’s Moving Image Archive holds a film made about her life.
An Anarchist’s Story by Mark Littlewood, 2006.
https://movingimage-onsite.nls.uk/film/8078
[Films not available online can be viewed by visiting the Moving Image Archive https://www.nls.uk/collections/moving-image-archive/visit/]

MacDonald and Aldred have donated their papers to the Mitchell Library in Glasgow if you would like to find out more.

An Historic Building:
Dalzell House, by Jack Anderson and Bryan Law, 1986-7.
https://movingimage.nls.uk/film/7375
Dalzell Estate was originally used as a royal hunting forest and belonged to the Dalzell family from 843AD. However, the lands were confiscated from the family in 1342 when Sir Robert Dalzell fell out of favour with David II for staying away in England too long without permission. The lands were restored to the Dalzell family in 1397 before being bought by James Hamilton of Boggs in 1647.

A Photograph:
Coatbridge Mine Rescue Corps, in The Scotsman, January 1955.
https://www-scran-ac-uk.nls.idm.oclc.org/database/record.php?usi=000-000-037-434- C&scache=1mva9yrrtu&searchdb=scran

Something about the county town:
Cumbernauld: Concept, Compromise and Organizational Conflict, by Alan Middleton in Built Environment, 1983.
https://www.jstor.org/stable/23286722