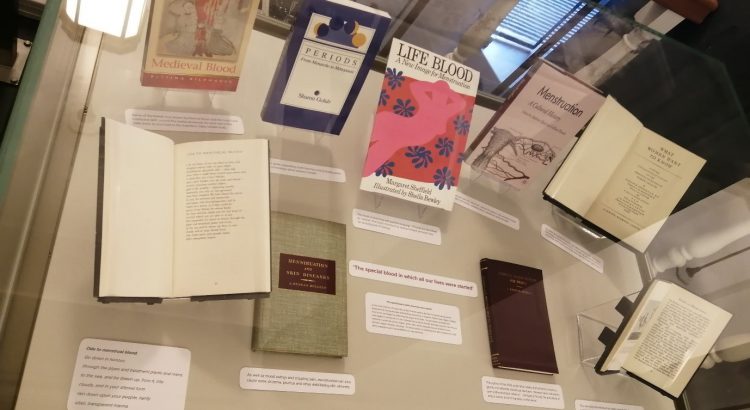 In early 2020, following the Government’s Period Poverty Bill and the subsequent Let’s Call Periods, Periods campaign, we committed to supplying free sanitary products in our buildings.

By happy coincidence, General Collections curators Dora Petherbridge and Jan Usher had been working with Professor Bettina Bildhauer and Dr Camilla Mørk Røstvik of St Andrews University, who are founding members of the Scotland-based Menstruation Research Network, a Wellcome-Trust-funded UK-wide group facilitating menstrual research. They had recently won a Royal Society of Edinbirgh Arts & Humanities Research Grant to research the factors behind how period poverty became a policy initiative in Scotland.

They both toured the Library in January and added to a useful discussion about the Library’s ’hidden’ holdings on many subjects, not just menstruation. A display, ‘The special blood in which all our lives were started’, was held in our George IV Bridge front hall during February.  Bettina and Camilla were all set to deliver a talk, ‘21st Century periods’, at the Library in May. Of course, we were overtaken by events, but not to be deterred, we have arranged an online event on Thursday, 3 September.

Recalling her visit, Professor Bildhauer said: “And there were a lot of hidden holdings. The 10 floors underneath the street level of the library collect books from all disciplines and areas, magazines and manuscripts, zines and pamphlets. This huge quantity of paper made us appreciate the value of a good cataloguing system. Recent books are tagged by their authors and publishers to indicate their topics, but how do you find girls’ magazines giving advice on first periods? This is especially tricky for subjects like menstruation, because people have an almost superstitious aversion to even saying the word. The language of catalogues can use euphemistic [BB1] circumscriptions of the area, such as “female hygiene” or “women’s health”, but most have not thought it worthy of even listing. This is where good old academic research skills come in. There is no getting around hours and years spent trawling through zines or manuscripts to reveal their menstrual content.

“While we are barred from lots of hands-on work just now, we are planning to give a brief overview over what’s going on with menstruation right now, and why Scotland is currently at the forefront of global initiatives to enshrine the tackling of period poverty into law. We will also reveal some of the reasons why menstruation is still so stigmatised, and what activists and artists are trying to do about it.”

Join us online for a free, fascinating and long overdue  talk about periods.