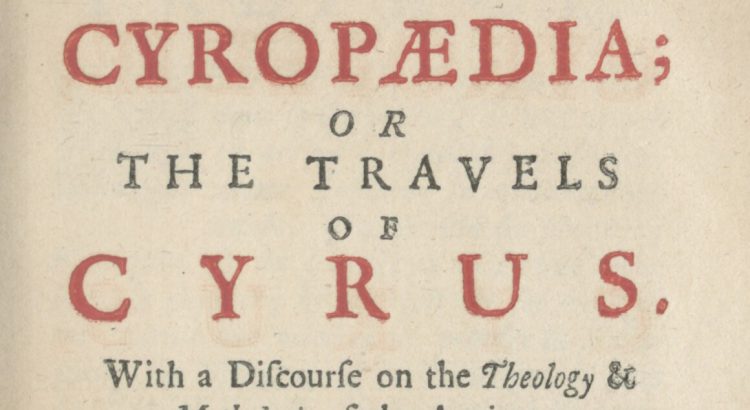 The choice: Andrew Michael Ramsay, A New Cyropaedia; or The Travels of Cyrus. (Edinburgh, 1729).

Read or download this book from our Digital Gallery.

Welcome to the latest of our new fortnightly series where we introduce you to some favourites from our collections for you to enjoy reading, all freely available online.

This week’s choice was an 18th-century sensation, a mystical/historical/educational novel of Cyrus’s search for wisdom across the ancient world.

Les Voyages de Cyrus was first published in 1727 and became a bestseller in France and then in Britain after being translated into English by Nathaniel Hooke, nephew of the Jacobite agent of the same name. Ramsay’s work imagines the travels of Cyrus the Great, the 6th-century BC founder of the first Persian Empire. Cyrus’s early life had been fictionalised by Xenophon of Athens as a way to promote his own political and moral philosophy and Ramsay uses this device to drive his own narrative. The work is also strongly influenced by Archbishop Fénelon’s Les aventures de Télémaque, fils d’Ulysse (The adventures of Telemachus, son of Ulysses). Though Fénelon’s work appears to be set in the time of Homer’s heroes it was immediately seen as a scathing attack on the autocratic rule of Louis XIV and the self-indulgent nature of aristocratic society. Ramsay also draws on the ancient Greek historian Herodotus, notably for a grisly event towards the end of Book 1.

Andrew Michael Ramsay, also known as the Chevalier Ramsay, was born in Ayr in 1686, the son of a Calvinist baker and Anglican mother. He is thought to have studied at both the universities of Edinburgh and Glasgow and, in rejection of his parents’ faiths, planned to enter the Episcopalian ministry. This too he decided against as he was drawn towards deism and subsequently the mysticism practised on the Continent by Madame Bourignon and Madame Guyon. He shared this interest with a circle of friends in Scotland, many of whom were Jacobites. Ramsay’s Jacobite ties were strengthened when he became tutor to the children of the Earl of Wemyss, which saw him move to London in 1708 and mix with the Jacobite nobility there. He travelled to The Netherlands in 1710 and then to Cambrai in France to study under Archbishop Fénelon, during which time he converted to Catholicism. He then moved to Blois to become secretary to Madame Guyon but by the end of 1716 he was in Paris where he became acquainted with the exiled Jacobite court.

His association with the Jacobite court culminated in December 1723 with his appointment as tutor to Charles Edward Stuart and early in 1724 he travelled to Rome to take up the role. By this time Ramsay had already found success as a writer of politico-theological treatises and had written a biography of Fénelon, whose stoic philosophy had a great influence on Prince Charles’s father James, to the frustration of the Jacobite cause. However, conflict within the court, Ramsay’s association with the duplicitous Earl of Mar, and the impracticality of a forward thinking educator such as Ramsay teaching a 3 year old Bonnie Prince Charlie saw him return to Paris after 9 months. He travelled to London in 1729 where he was elected a fellow of the Royal Society and received a doctorate in civil law from the University of Oxford the following year. He lived out the rest of his life in France where he died in 1743.

Cyrus’s travels begin when his mother Mandana takes him to the court of his grandfather Astyages at Ecbatana. There he distinguishes himself in both his conversation and military prowess and his mother, sensing this may go to his head, warns him against being seduced by the luxuries of the court. This introduces a recurring theme whereby states and their leaders are weakened, corrupted and led astray as the introduction of luxury to society breeds destructive greed, jealousy and ambition. Cyrus’s virtue is also preserved by his love for Cassandana despite the obstacles in their path. After leaving Persia Cyrus’s travels take him to Egypt, Greece, Crete and Cyprus before he returns to his homeland.

On his journeys Cyrus meets famous figures such as the philosopher Pythagoras, the Athenian lawmaker Solon, the spiritual leader Zoroaster and the Spartan general Leonidas. He is told the histories of his hosts’ nations and stories that illustrate moral virtue and how a wise leader should act. These and other historical figures presented in the book were a more immediate vehicle for Ramsay’s ideas than we might find them today, being familiar to educated readers of the 18th century who received much of their education via the authors of classical Greece and Rome. Cyrus’s time with Solon is used by Ramsay to illustrate the author’s own view that the best form of government was a benevolent monarchy advised by an aristocratic senate, avoiding “all the disorders of a popular government”. The mysteries revealed to Cyrus include the Greek philosophy of metempsychosis involving the reincarnation of the soul, and Ramsay blends Christianity with Newtonianism: something that appealed to his freemasonry where he became a leading figure in France. Several times Ramsay refers to a “first Mover”. Zoroaster tells Cyrus “the first Mover draws all spirits to himself, & by his almighty attraction unites them in different societies; so does he likewise continually act upon all bodies, give them a tendency towards each other, & thereby range them with order into different systems.”. The text continues in the following image.

The book is interesting as an imaginative tour of the ancient world and for the stories within the story that make for entertaining reading despite their didactic purpose. It is also a reflection of the early 18th century when princes and monarchs could still rule absolutely, authors needed the patronage of aristocrats and forms of government and religious thought were evolving. The edition linked to at the head of the blog is presented in its original French and English translation.