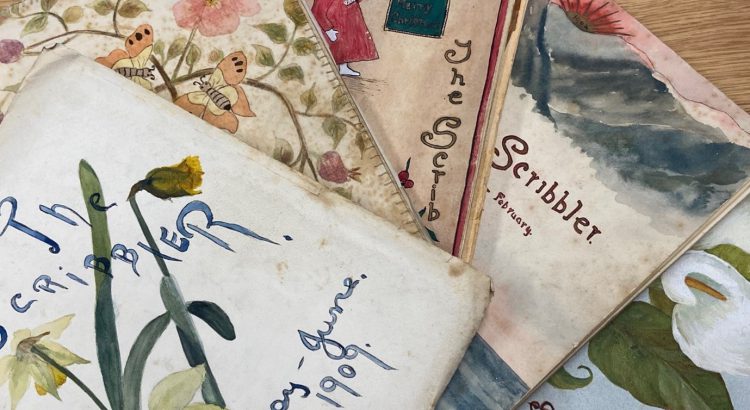 Isobel Wylie Hutchison features in our ‘Treasures of the National Library of Scotland’ exhibition. Her diaries, manuscripts, photographs, artwork and film all reveal a woman who loved to travel, but also one whose connection with the outdoors was important:

I had heard the call of the wild, on star-lit nights under the Northern Lights. I had slept in a snow-hut…and my heart beat for the wilderness

‘North to the Rime-Ringed Sun’ by Isobel Wylie Hutchison

Born into a wealthy family in 1889, Hutchison grew up at Carlowrie near Kirkliston. She started to write at an early age and, with her siblings, produced a magazine for family and friends named ‘The Scribbler’. It included articles on the natural world and beautiful artwork of various plants, flowers and animals.

Hutchison’s father taught her botany and she enjoyed walking and being outdoors, a trait that would remain with her long into adulthood. She would later describe her long walks as “strolls”, but that term plays down the length and endurance of her walking activities – at the age of 20 she walked 100 miles from Blairgowrie to Fort Augustus!

And it was to nature that she retreated when her mental health deteriorated in 1920, following the deaths of first her father and then both of her brothers at young ages. Hutchison found refuge on the Isle of Tiree. She was a keen diarist and some of these diaries start with personal goals for the year. While she was on Tiree, one such aspiration reads:

Being so close to nature revitalised and inspired her. She did a walking tour of the Outer Hebrides and followed that with a 250 mile walk in Iceland. There even the locals thought she would not be able to complete given the terrain, lack of maps and deep rivers.

“No one goes on foot in Iceland…To walk! It is impossible…To walk!” He laughed again…In the small hours of the morning my mind was made up. I would not sail tamely home in three days’ time, having accomplished only the usual tourist’s round; I would walk up alone, hiring ponies where needful, from Reykjavik to Akureyri”

Isobel Wylie Hutchison, ‘A Walking tour across Iceland’ in National Geographic, v.53 no.4, 1928

The botany her father had taught her was instrumental for her next adventure. Access to Greenland was heavily controlled by Denmark, but Hutchison applied to go as a private botanist, with the intention of finding and collecting samples.

She ventured to Greenland in 1927 and again in 1928. While there, she not only collected flower samples, but continued her diaries, took photographs, painted and filmed the land, people and wildlife.

Hutchison returned with botanical samples, which she took to botanical gardens in the UK. On the strength of these specimens, they agreed to pay her for samples collected on future travels. This helped to fund her subequent  adventures where she further explored the Arctic.

Hutchison went to the west coast of Alaska and the Canadian Arctic in 1933, travelling by boat, train and aeroplane – it was by no means luxurious accommodation, often travelling with traders and trappers.

It was in Alaska that Hutchison met the trader and trapper Gus Masik, who would become a great friend.

Her journey with Masik was not for the faint hearted, but one that she delighted in. The travel, landscape and beauty of the region inspired her. When they needed shelter, Masik built a snow house:

“Banners of green light were threading in and out across the clear starlit sky, their weird tentacles clutching now here, now there…amid the snow and ice-bergs that covered the sea rose the fairylike dome of a snow-house, a light from within glimmering through its walls till they shone like the hood of a daffodil in sunshine. Crawling on hands and knees through the low doorway, I found myself in a tiny crystal chamber, its walls, floor and roof shining like diamonds in the light of a candle frozen to the floor”

Ice further hampered their travel, so they had to stay in Masik’s cabin for some time, but eventually, they set out for Herschel Island by dog sled. It took four days to cover the distance. They then separated, with Hutchison continuing her explorations of the Alaskan coastline until she left in February 1934.

Hutchison published poetry and prose and gave many lectures about her travels. As well as her own publications, she contributed articles to journals like ‘The National Geographic’. She earned a growing reputation among the travel and exploration community and became the first female recipient of the Mungo Park medal from The Royal Scottish Geographical Society in 1934 (pictured below).

Hutchison continued to travel, notably to the Aleutian Islands in 1936, before coming back via Japan, China, Moscow, Poland and Germany. The Second World War intervened in any further adventures for a few years, but soon afterwards she returned to travelling, spending time outdoors and thoroughly exploring Scotland. Hutchison died at Carlowrie in 1982 at the age of 92.

Hutchison’s deep connection with nature is evident in her many publications, photographs and artwork. Her love for the great outdoors is inspiring and her records here at the Library are certainly worth exploring, although Hutchison might have argued that the true treasure was in fact her inspiration:

The earth is very wide, her treasure waits for you

You can visit the Treasures exhibition at the National Library of Scotland in Edinburgh and find details of the archive of Isobel Wylie Hutchison on the Catalogue of Archives and Manuscript Collections, her films at our Moving Image Archive, and many of her published works on our catalogue.