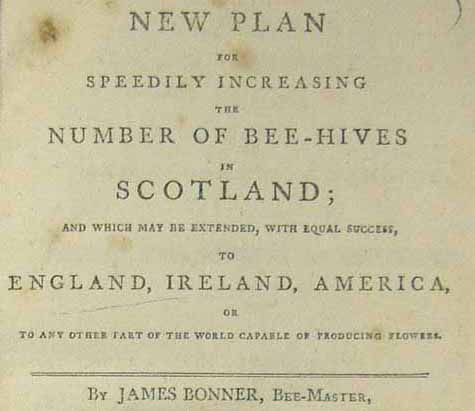 In anticipation of Spring’s arrival I’ve recently been doing a little gardening to prepare plants, trees and soil for the coming warmer weather and its promise of rebirth after the dreich Scottish winter. The returning of birdsong and the anticipation of flowers and green leaves made me consider the importance of bees to the wellbeing of our natural world.

The National Library of Scotland has one of the finest collections of rare and early printed collections on bees and beekeeping in the world called the Moir Rare Book Collection.

Of the books written in English in this amazing collection, James Bonner’s A New Plan for Speedily Increasing the Number of Bee-hives in Scotland (Edinburgh, 1795) is among the most interesting. Bonner lived in Berwickshire and learned beekeeping as a young boy from his father.

Straightforward and easy to follow, it is an expansion of his earlier publication The Bee-master’s Companion and Assistant (Berwick, 1789) and is notable for being the very first book to address the specific problem of keeping bees in Scotland. His observations on the unpredictability of Scotland’s climate are as valid today as they were 226 years ago:

Bonner’s intended readership was the landed gentry, and his goal was to show how increases in beekeeping, and therefore honey production, could be a source of national prosperity.

Some of his observations on bee behaviour reflect understandings of the bee life cycle at the time. For example, he accepts that the drones are males but is perplexed as to their purpose in the hive as he observes the queen laying eggs with no apparent interaction with them.

Bonner was not able to observe that on warm and sunny afternoons during the mating season, sexually mature drones, fly out of the hive and congregate with other drones high in the air, to form a cloud of bees. There may be thousands of drones from hundreds of different colonies. Mating with queens then takes place within these swarms ten to forty metres off the ground. https://en.wikipedia.org/wiki/Drone_(bee)

The book is also of interest in the context of climate change and our understanding of how bees contribute to a working ecosystem. In the following text Candlemas refers to February 2.

On page 131 Bonner’s instructions continue on to June:

Bonner concludes by advocating the benefits of beekeeping to one’s emotional wellbeing: “I am quite certain, and some others have often told me … that the melodious humming of bees, when busy at work, or sporting in the air for their own amusement will have such an effect … that, however chagrined or ruffled the temper of a person might be, before he takes a walk among his bees, he generally does not withdraw till the mind enjoys a perfect calm and inward tranquillity.