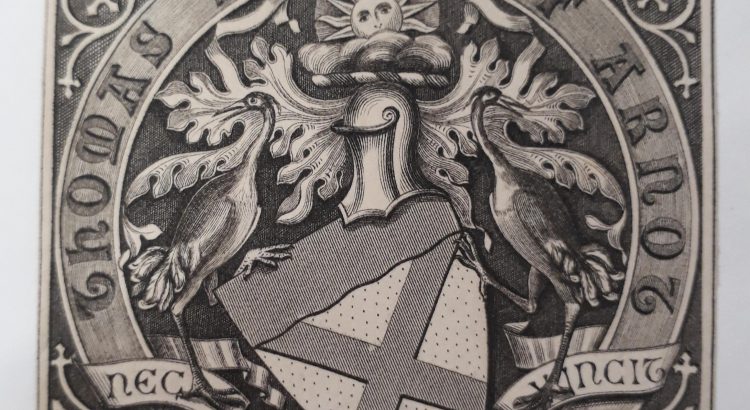 This blog post is about the bookplates collections in the National Library of Scotland and about what it can tell us about the types of people who owned books in eighteenth and nineteenth century Scotland. My name is Bryony Pillath and I am doing an MSc in Book History and Material Culture at the University of Edinburgh. As part of my course, I did a work placement at the Library where I was put to work helping with the early stages of a project for entering the details of the bookplate collection paper slip catalogue onto a digital spreadsheet. I worked on the entries for Scottish bookplates catalogued under letters A-G of the alphabet.

Bookplates are printed labels glued into the fronts of books to mark ownership, like a ‘this book belongs to…’ sticker that children might use. Many people have used them in their books all over Europe since the sixteenth century and some people still use them today. The bookplates were printed from engravings so that many copies could be made for one person to use in all their books. The designs were made specifically for each person and up until the last hundred years or so they usually included the owner’s coat of arms and their name. Later bookplates often have simpler designs without a coat of arms or have striking pictorial designs influenced by contemporary art and architecture. 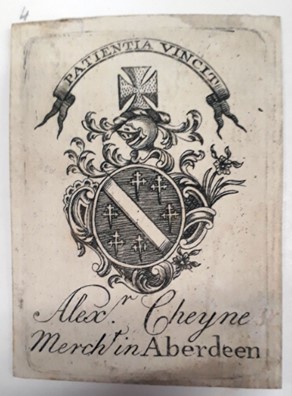 In the nineteenth century it became fashionable to collect bookplates belonging to different owners. Collectors were attracted by the huge numbers of different plates and designs – unused bookplates or bookplates removed from the books they were in were sold or traded between collectors. Some collectors built up collections of tens of thousands of bookplates! Many of these collections later ended up in libraries around the world, including the John Henderson Smith Collection which was bequeathed to the National Library of Scotland in 1953. His collection is of around 25,000 mainly Scottish and English bookplates, most of which date from the eighteenth and nineteenth century, all carefully arranged in 40 albums 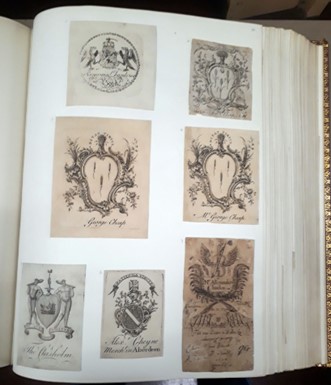 Looking at the different bookplates in the collection can tell us new things about the types of people who owned books. It is well known that certain types of people such as landed nobility and professional men like lawyers and doctors have historically been more likely to own books than other groups. This is because these people had more money and books were expensive, but also because, especially since the eighteenth century, owning books showed off that you were part of fashionable society and interested in fashionable culture of the time. Lawyers and doctors also needed large numbers of books as a source of information for carrying on their work. These types of men often used bookplates to mark ownership of their books. For instance Charles Areskine (also spelled Erskine) of Alva, a top Scottish lawyer in the eighteenth century, used a bookplate and examples can still be seen in some of his books which are now in the Alva Collection at the National Library of Scotland. 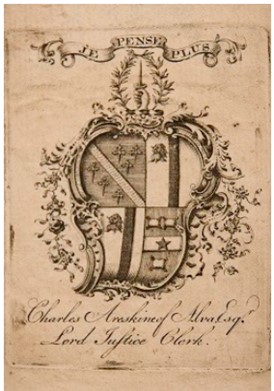 As well as many examples of these well known types of book owners, the bookplate collection reflects that fact that books were becoming available to a wider range of people from the seventeenth and eighteenth centuries and education was becoming more widespread, making books more accessible. The collection includes bookplates belonging to tradesmen and craftsmen. For example, the book label below belonged to a wright and member of the Incorporated Trades in Dundee who was responsible for the wright work in the building of St Andrew’s Church near the Cowgate in Dundee in 1774 designed by the Dundonian architect Samuel Bell.[1] A book label is a variation on the bookplate theme usually a simpler design printed using an ordinary printing press rather than engraved. 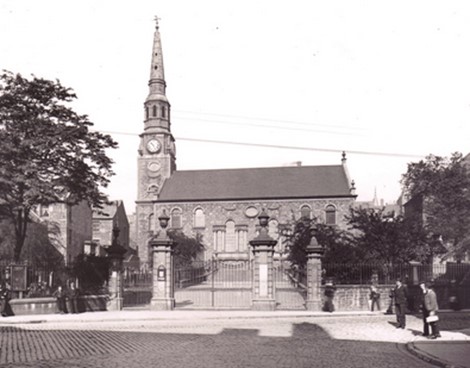 It is known that women as well as men had collections of books from early modern times, especially those of higher social class who were more likely to be educated, but it is more difficult to find evidence of this, perhaps because the books chosen by women were incorporated into the family library and afterwards recorded among the books belonging to male relatives. The bookplate collection has a small number of women’s bookplates showing that some women did mark their own books , for example compare the two bookplates below belonging to a man and woman of the same family, using the same coat of arms but with their separate names below. There are also tantalising examples of women of apparently lower status owning books – such as Mrs Brown of Tiviot (or Teviot) Row in Edinburgh (see below) – it is a shame we don’t know any more about her or what sort of books she owned! 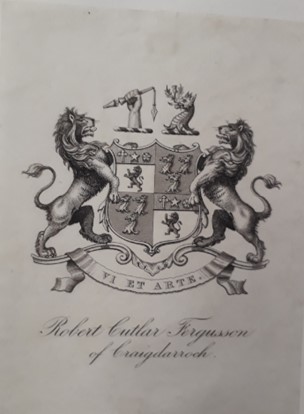 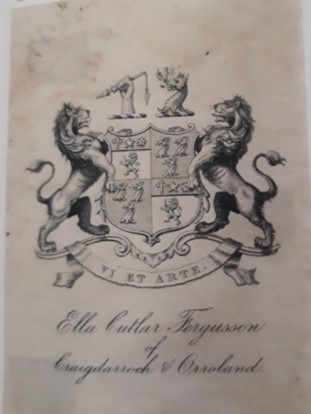 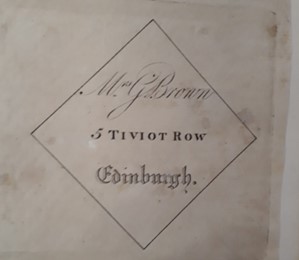 The volumes of bookplates in the collection are available for Library members to look at in the Special Collections Reading Room in Edinburgh and can be requested using the online catalogue. There is also an alphabetical paper slip catalogue available on request for searching for individual bookplates. A project is underway at the moment to transfer the information on the slip catalogue to a spreadsheet which will eventually be the basis of an online resource allowing users to easily search for bookplates by name, location and occupation information – this will make it easier to use for people looking for information about particular book owners or wanting to know more about types of people who owned books. With a collection of over 25,000 bookplates this will provide a lot of information! But as the information must be typed up manually, it will take a wee while for the project to be completed.

Thank you to Graham Hogg from Rare Books, Maps and Music Collections , for capturing all the images from the collections used in this post, and for supervising my placement.

For more general information about bookplates see chapter 3 of David Pearson’s book Provenance Research in Book History, Oak Knoll Press, 2019 and publications by Brian North Lee, for instance this interesting article full of anecdotes about gentlemen who had bookplates: “Gentlemen and their book plates” in the book Property of a Gentleman: The formation, organisation and dispersal of the private library 1620-1920, edited by Robin Myers and Michael Harris, Winchester, 1991, p. 43-76.

To find out more about the types of people who owned books in eighteenth and nineteenth century Britain see the chapter by Giles Mandelbrote “Personal Owners of Books” in volume 2 of The Cambridge History of Libraries in Britain and Ireland,1640-1850, edited by Giles Mandelbrote and K. M. Manley, Cambridge University Press, 2006.

For interesting articles about women book owners in early modern Britain see Heidi Hachel’s chapter “The Countess of Bridgewater’s London Library.” in Books and Readers in Early Modern England: Material Studies,edited by Jennifer Andersen and Elizabeth Sauer, University of Pennsylvania Press, 2002, p. 138-159, or David McKitterick’s journal article “Women and their books in Seventeenth Century England: The Case of Elizabeth Puckering.” in The Library, vol. 1, no. 4, 2000, p. 359-380.

Karen Baston’s book Charles Ariskine’s Library: Lawyers and their books at the dawn of the Scottish Enlightenment, Brill, 2016, is a great study of an eighteenth century professional in Edinburgh, what books he had, how he got them, how he used them, and what that says about the culture of the time.