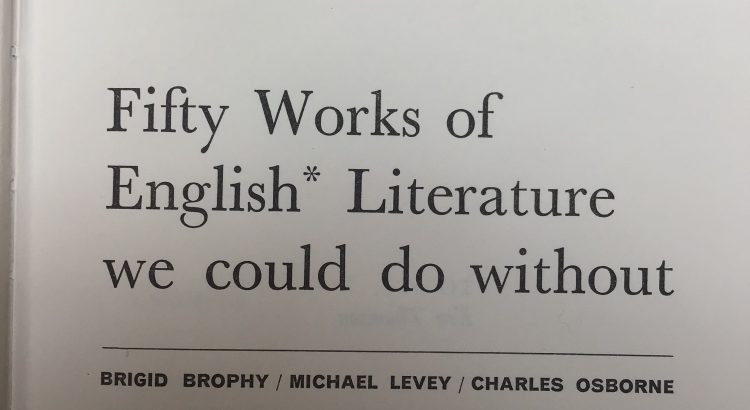 The Library of St John’s College, Oxford used to be home to an edition of Spenser’s “The Faerie Queen” in which a discontented undergraduate had written his opinion of the books that he was obliged to read for his course.

“First I thought Troilus and Criseyde was the most boring poem in English. Then I thought Beowulf was. Then I thought Paradise Lost was. Now I know that The Faerie Queen is the dullest thing out. Blast it”

The discontented undergraduate was Philip Larkin, who would go on to become arguably Britain’s greatest post World War II poet and a librarian of note. Larkin’s scribbles foreshadow the lines “Get stewed / Books are crap” from his poem “A study of reading habits”.

The 1967 book “Fifty works of English (and American) literature we could do without” by Brigid Brophy, Michael Levey and Charles Osborne takes a similar approach to the classics, gleefully dismissing pillar after pillar of the English language literary canon. The authors though had a serious intent. They aimed to save readers from books that are “blatant tripe or unreadable” and believed that many books in the canon and on reading lists could put people off literature for good.

The authors make clear their intentions in the book’s introduction. “English literature, as it is presented by pundits to enquiring persons, is choked with the implied obligation to like dull books. In making a start on weeding it, we have been moved by our sense of the injustice done to great authors and to the public” They are too modest, they don’t so much weed the garden of English literature as carpet bomb it with DDT.

The book covers fifty works from “Beowulf” (700-1000 AD) to Hemingway’s “A farewell to arms” (1929) and takes a chainsaw to them all. The pleasure the authors take in doing so is infectious. Below are their judgements on some of the most venerated and enduring works in the literary canon

“Distended with hot air himself, Melville’s whale can beget no progeny except wind eggs”

Leaves of Grass by Walt Whitman

“What is one to say of this garrulous old bore? Whitman’s so called poetry ranges from a simpleton’s idea of Shakespeare and the purpler passages of the Bible to sheer semi-literate sludge”

The history of Mr Polly by H.G. Wells.

“What is the point of this book?”

Tess of the d’Urbervilles by Thomas Hardy

“Perhaps it was Wessex clay that clogged Hardy’s pen. Some-thing certainly intervened between the sublime tragic idea dimly in his head and the ludicrous results when set on paper”

“Children aren’t fond of the book, and adults either forget that as children they did not like it, or pretend they did”

To the lighthouse by Virginia Woolf

“No, no is one’s reaction to the title. And, indeed, to the whole book”

The sound and the fury by William Faulkner.

“We could easily do without the entire oeuvre of William Faulkner”

A farewell to arms by Ernest Hemingway

“Shouldn’t we now recognise him as a footnote to the minor art of Gertrude Stein, an appendix to the biography of the great novelist Scott Fitzgerald, and the Ouida of the thirties?”

The authors manage to damn the work of four poets in one sentence.

“Compared with Kipling or Henley or Francis Thompson, Houseman is almost bearable”

Whilst inevitably the text mainly consists of takedowns of literary classics, the book’s aim is to divert readers to works the authors’ think more worthwhile. Read F. Scott Fitzgerald, George Eliot and Jane Austen and not Ernest Hemingway, Thomas Hardy and Hermann Melville is the message of the book.

Who are these authors making a full frontal attack on the canon and what are their credentials? Brigid Brophy (1929-1995) was a leading British novelist who was also known for campaigning for animal rights and gay marriage. She played a central role in the successful campaign to establish Public Lending Rights for authors in the UK that ensured writers were financially compensated for loans of their work by public libraries. Ironically Brophy has almost disappeared from the canon herself, and her once acclaimed novels are largely out of print. Her 1964 novel “The Snow Ball” was brought back into print last year. Brophy’s work is held in high regard by many contemporary writers including Ali Smith, Sarah Waters and Hilary Mantel. In 1983 she was diagnosed with multiple sclerosis. Michael Levey (1927-2008) was Brophy’s husband. He was an art historian and the director of the National Gallery from 1973 to 1986, relinquishing the post to care for his wife. It was a happy if unconventional marriage during the course of which Brophy pursued affairs with Iris Murdoch and Maureen Duffy. Charles Osborne (1927-2017) was a music and theatre critic and literature director of the Arts Council of Great Britain from 1971 until 1986. He wrote a biography of Agatha Christie and adapted four of her plays into novels.

The book caused a minor sensation when it was published. Not everyone though was impressed, Anthony Burgess commented “Like children, they have shown off, and the showing off has provoked attention.” The book was one of the opening salvos in an ongoing debate on what should be in the literary canon, that continues to this day.