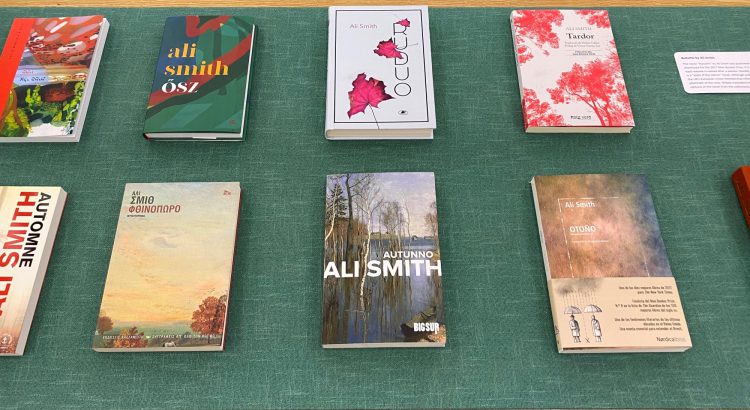 The novel “Autumn” by Ali Smith was published on 20th October 2016 and was shortlisted for the 2017 Man Booker Prize. It is the first volume in a quartet, each volume is named after a season. Quickly written and speedily published it is a “state of the nation” novel. Although published less than four months after the UK’s European Union membership referendum the novel reflects on the aftermath of the vote.

For the next month the Library is displaying copies of “Autumn” at the top of the main staircase in our George IV Bridge, Edinburgh building. The display showcases 17 different editions of “Autumn” from around the world including translations into Korean, Hungarian, French, Polish, Norwegian, Slovak, Hebrew, Greek and Lithuanian. It is a riot of autumnal shades and imagery, featuring leaves, trees and landscapes in red, chestnut brown and olive green.

The display highlights a large and growing part of our collections, translations of works by contemporary Scottish writers. We have translations of books by Alexander McCall Smith, Irvine Welsh, Val McDermid, Ian Rankin, Alasdair Gray, J. K. Rowling and A.L. Kennedy and many other Scottish authors into languages from all around the world.

Scottish fiction has long been popular and influential in translated editions. Translations of novels by Sir Walter Scott influenced Dostoevsky, Flaubert, Tolstoy and Pushkin amongst others and Robert Louis Stevenson and Arthur Conan Doyle are amongst the most translated authors in literary history. Today seemingly almost every Scottish writer of any renown has been translated. For example, Glasgow born writer Peter May is a bestseller in the UK but probably even more successful in his adopted homeland of France where he has won several major literary awards. His thriller “The Black House” set on the Isle of Lewis was first published in a French translation in 2009 to instant acclaim. It was published in English in 2011, by which time it had already been a bestseller across Europe.

Why collect translations of works when we already have the English language original? The books are a tangible record of international interest in a writer. Translation studies are taught at many universities, so having multiple editions of a novel in many different languages is a useful resource for our users. As the display hopefully shows it is fascinating to see the covers created by artists and designers around the world for a single work. Many people will be familiar with the cover of the UK edition of “Autumn” which has an autumnal brown jacket with a wraparound dustjacket, and features David Hockney’s 2006 painting “Early November Tunnel”. It is one of the most strikingly designed book covers of recent years. They won’t though have seen the covers of these international editions.

The Danish edition has a quotation on the cover, “Et post-brexit mastervaerk”. Even someone with my limited linguistic skills knows this means they liked it.