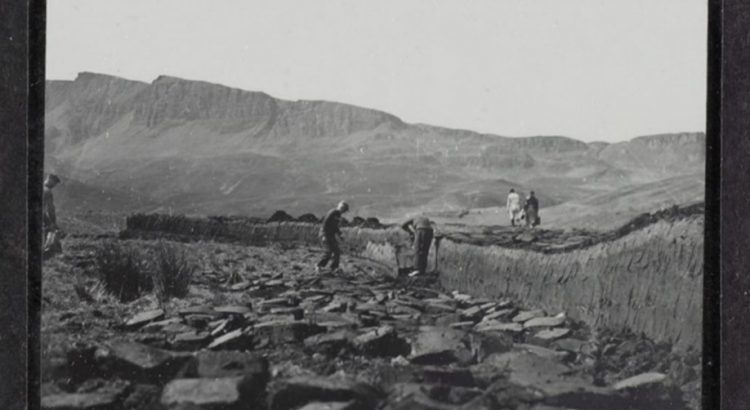 Of the 26,500 people living in the Outer Hebrides, approximately 1,200 live on the island of Benbecula, many in coastal locations. They depend upon the north-south spinal road which connects to North and South by causeways. These connections and many of the coastal settlements are at risk from inundation both from sea level rise and more extreme weather events.The airfield would also be affected.

The highest point is only 124m; with most of the island only 20min elevation. With a maritime climate with a low annual temperature range, any warming could have a significant impact on the flora, fauna, and farming on the island.

New and improved chart of the Hebrides or Lewis Islands and Adjacent Coast of Scotland from the Mull of Cantire to Cape Wrath drawn from the latest surveys by J.W. Norie.  1816 [updated to 1851]

Islands of the West, directed by Bill Forsyth, 1972. This film explores the beauty of the Hebrides.

South Ford, Benbecula — tide out, by George Washington Wilson, 1860s-1880s from the MacKinnon Collection. Two people, with horse and cart, are pictured at the South Ford causeway on the island of Benbecula in the Outer Hebrides. The causeways between the islands are at risk from storm surge and rising sea levels.

Beyond the meta-ecosystem? The need for a multi-faceted approach to climate change planning on coastal wetlands: An example from South Uist, Scotland.  Ocean & coastal management. Volume 165 (2018); pp 334-345. This item came to the Library through e-Legal Deposit and is only available to view in the Library. View information about Legal Deposit on our website.

Uist Lagoons Survey by C.M. Howson, S.J. Chambers, S.E. Pye, & F.J. Ware, Scottish Natural Heritage Commissioned Report No. 787, 2014. Over half of the Scottish lagoons are in the

Western Isles and two of the ten British Special Areas of Conservation established for lagoons, Obain Loch Euphort and Loch nam Madadh, are in the Uists. The lagoon habitat is vulnerable to inundation and warming.

A Survey of Population Changes in Breeding Waders on Machair in Benbecula and North Uist, Annual Surveys in 2008-2010 and Changes since the Mid-1980s, by John Calladine, RJ. Fuller, and Liz Humphreys. Commissioned Report Scottish Natural Heritage ; No. 408. 2011. The west coast habitats of the Uists are internationally important for their populations of breeding waders.

Both heritage and modern built environments are at risk from rising sea levels and storm surges, because many habitations around the islands are coastal.

Photograph of children on North Uist, from the Papers of Seton Gordon [Library reference: Acc.7451/24]

Journal of island and coastal archaeology. Volume 14:Number 1 (2019); pp 46-60. UK legislation regulates access to this resource which is available on Library computers in our reading rooms and public access centre.

Excavations at Cill Donnain : A Bronze Age Settlement and Iron Age Wheelhouse in South Uist by Michael Parker Paerson and Marek Zyelebil. Sheffield Environmental and Archaeological Research Campaign in the Hebrides (Series) ; v. 9. 2014. Available to read in the Library. The excavation discovered that what was thought to be a shell midden at Cill Donnain was in fact a wheelhouse, a type of dwelling used in the period c.300 BC – AD 500. Under it lay the remains of an earlier Bronze Age settlement. The site is situated at the foot of a high steep-sided dune on the eastern edge of a large sand valley, close to the western shore of Loch Cill Donnain.

Photograph of people working with peat on South Uist, from the Papers of Seton Gordon [Library reference:  Acc.9990/22]

Plan of the island of South Uist the property of Ranald George Macdonald Esq. of Clanranald, by WIlliam Bald, 1805. Includes acreages of arable, pasture, hill pasture and lochs.

The Land Utilisation Survey was the first systematic and comprehensive depiction of the land use in Scotland (1931-1935) and is useful to compare with modern usage. From the key it is easy to see that much of the islands was designated as rough pasture with cultivated land close to the shore.

Photograph of aeroplane on Barra Sands, from the Papers of Seton Gordon.

Steamers to Stornoway : Ships and Shipping Services to Lewis from 1750, by Colin Tucker, 2013. Available to read in the Library.

“Socio-economic Impacts of Community Wind Power Projects in Northern Scotland.” by Lasse Okkonen and Olli Lehtonen. In: Renewable Energy 85, pp.826-833. UK legislation regulates access to this resource, available on Library computers in our reading rooms and public access centre. Community wind power offers a way to generate resources to be re-invested in local development purposes, such as businesses, social services, infrastructure, and communications. In this study, regional input–output modelling is applied to the socio-economic impacts of 11 wind farms of community-based social enterprises located in the Outer Hebrides, Shetland and Orkney.

Island of the big cloth, directed and filmed by Edward McConnell, 1971. The story of Harris tweed and of the life of the islanders who produce it.