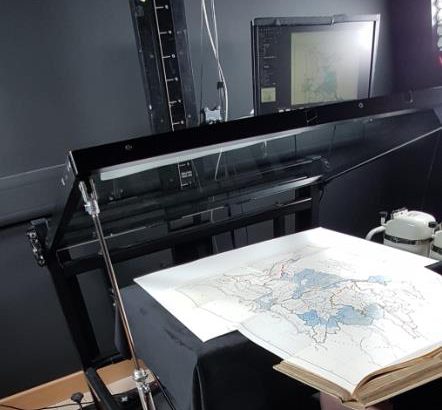 The National Library of Scotland holds well over 1.5 million maps and counting. The collection ranges from manuscripts to single fold-out maps in books to Ordnance Survey series containing 1000s of sheets. Holding such extensive collections puts the Library in a unique position as both safekeepers and disseminators of the extensive information held within them.

The goal of digitisation is therefore two-fold: preservation and access. We create digital preservation copies of our collections so that were anything to happen to the physical copies, the information would not be lost. Furthermore, digital copies protects the original physical copies from excessive handling. The second goal is access. As a library, one of our main goals is to provide information to the public. By providing online access to maps free of charge, we open up our collections to a much wider audience.

The Library embarked on their first map digitisation efforts in 1996, focusing on the Pont Manuscripts (see here for more information on Scottish mapmaker Timothy Pont: https://maps.nls.uk/pont/index.html). The Pont manuscripts are one of the Library’s ‘Treasures’; they are both historically important and physically vulnerable. Therefore, this collection of 38 sixteenth-century manuscript sheets ranked highly among our initial digitisation priorities.

However, because the maps were the first to be scanned, these digital images are now among the lowest resolution of all our digital maps, scanned at 200-350 dpi on a Phase One Powerphase camera. Now, our single sheet maps are all scanned at 400 dpi.

Significant work goes into getting our maps online both before and after scanning. These pre- and post-processing tasks will be explored in subsequent blog posts.

Maps printed on sturdy paper, such as Ordnance Survey maps from the 1840s through the 1960s, are scanned using the Colortrac SmartLF Gx+ T42 sheet-fed scanner. To be fed through this scanner, maps must be in good condition, with no tears or other conservation concerns. This is because pressure is applied to both sides of the map as internal rollers guide and gently press the map through the scanner. This allows the map to be captured as flat as possible, which is necessary in order for the software to accurately ‘stitch’ the image sections together to create one complete high resolution image.

Bound volumes are usually captured on the Digitisation department’s V-shaped scanning systems, however they can sometimes contain large pages that are folded into the book’s gutter (called ‘fold-outs’) that are too large to be captured on the V-shaped systems. Maps printed on such fold-outs, as well as fragile single-sheet maps, are scanned using the department’s Phase One camera cantilever cradle system. The cantilever system can capture books of different spine thicknesses, which is essential for capturing fold-outs. In addition, the glass plate applies an even pressure across the item, which is safer for such materials than the roller system in the sheet-fed scanner.

Maps are fed through the scanner one at a time. Several sets of rollers within the scanner guide the map through to the other end. As the rollers push the map through, the scanner captures several images of each section of the map at once. The SmartWorks Pro software automatically stitches these images together to produce one complete image. Maps are scanned at a high resolution (400ppi) and scanned to departmental colour standards to ensure that the colour of each image is as true to the original item as possible.

Like maps scanned with the sheet-fed scanner, maps on this system are captured at 400ppi where possible. In cases where maps are too large to safely manoeuvre onto the cradle, as well as in cases where stitching an item becomes too time consuming, a decision is taken to scan a map at less than 400ppi, but at no less than 320ppi.

In the next few images, we will demonstrate the process of capturing a large fold-out map from the Annual report of the Sanitary Commissioner for Bengal, 1882 (Shelfmark IP/6/SB.3).

Large fold-outs are particularly difficult to capture due to the difficulty of manoeuvring and supporting the map on the book cradle in such a way as to capture the map safely and completely, or in sections if necessary. In this case, the map will need to be captured in two sections as it is too large to capture in a single image. The image sections will later be stitched to form one complete image.

The cantilever cradle allows the operator to adjust and counterbalance the thickness of the book‘s spine with the thin map, allowing the map to lay as flat as possible. The map is further supported by thick card and foam if necessary. A colour chart is positioned beside the map, which will be used for colour balancing later.

The foot pedal is pressed to lower the glass onto the map, and the operator captures the map with a shutter-release remote.

The next section of the map is captured.

Using the CaptureOne photo editing software, the white balance is set and the colours are balanced to meet departmental colour standards to ensure that the image reflects the original item as accurately as possible. The RAW files are then processed to produce two TIFF files.

A semi-automatic stitching process is undertaken at this stage using the PTGui photo stitching software. The software takes a best-guess attempt at stitching the two images automatically, and the user assists the software in adding control points to the images’ common areas.

Once the control points have been added, the software produces a combined image from the two section images. Using Photoshop the image is cropped and its layers are flattened to produce the final image.

We use very similar imaging techniques for volumes of maps (such as atlases), as well as for flat sheet maps that cannot go through the sheet-fed scanner due to their age or condition.

With about 15% of our maps collection digitised, the Library has a long to-do list when it comes to scanning. Our detailed digitisation plan aims to scan over 30,000 maps each year for the next five years.