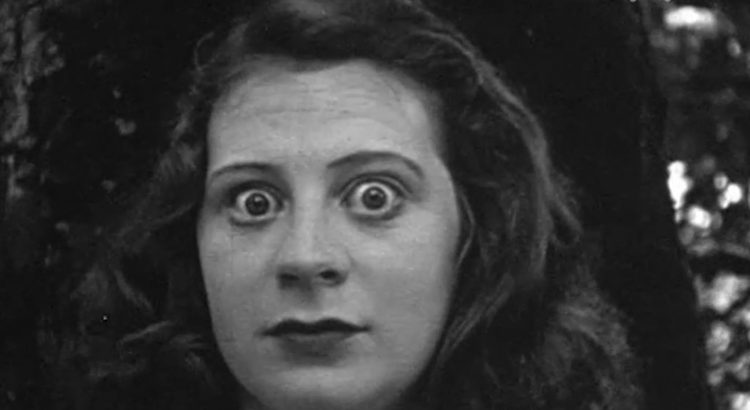 This compilation was made for Halloween and, inspired by the footage we have in the moving image archive, references American ‘B’ movies from the 1950s. The compilation includes extracts from many different films and, in particular, work by Wishaw filmmaker Enrico Cocozza.

A very brief history of horror

Films featured the supernatural from the earliest days. Indeed, another name for film exhibition used by travelling showpeople was ‘the ghost show’ , perhaps due to the apparition-like quality of the first films. In a sense, film was not an object in and of itself but was a way of mediating and recording something as it happens. The film stock was a carrier for memory, a ‘medium’ if you like.

George Melies, who is known for making spectacular trick films, made Le Manoir du Diable (The House of the Devil) in 1896. It features a vampire bat, witches with broomsticks and a devilish character holding a pitchfork. X-Rays (1897) while not a horror film uses trick photography to strip a couple of their flesh in a slightly ghoulish manner.

The gothic novel was popular adaptation material for film producers. Edison made a version of Frankenstein in 1910. This version has been restored by the Library of Congress: https://www.loc.gov/item/2017600664/

There were adaptions in this decade of Edgar Allen Poe stories and in the early 1920s of Dracula-inspired tales, including Murnau’s otherworldly Nosferatu (1922). Tod Browning’s Dracula (1931) made Bela Lugosi the iconic face of the Count. Browning was one of the first to explore the motif of the creepy doll in his film The Devil Doll (1936), somewhat eclipsed in the 1980s by Chucky.

Psychological horror made an early appearance, too, perhaps also through the influences of Romanticism and the Gothic in literature. The Student of Prague (1913, Germany) is the story of a man who sells his soul and is then confronted by, and shoots, his doppelganger. The earliest adaptation of Jekyll and Hyde is thought to date to 1908, although no copies of this film still exist (see https://en.wikipedia.org/wiki/Dr._Jekyll_and_Mr._Hyde_(1908_film) ). There were many versions made of Stevenson’s story. Best known, perhaps, is the 1931 version directed by Rouben Mamoulian which won Fredric March an Academy Award for his performance.

In the 1950s, films featuring horror themes (the supernatural, monsters, fear of the unknown) had a boost as the Hollywood studios tried to attract a young audience away from TV through the production of less expensive ‘B’ movies. Science fiction was equally popular with tales of alien invasions and mad scientists seen to reflect social anxieties around war and modernity. Around the same time there was a spate of American rockabilly tunes with horror themes. You can experience a few of these ‘graveyard rock’ songs here: http://www.the13thfloor.tv/2016/03/08/11-of-the-greatest-horror-themed-rockabilly-songs-ever/

Enrico Cocozza was an independent filmmaker who was inspired by the dark, surreal and avant-garde in cinema. In his work, which we preserve at the National Library of Scotland and which spans from the 1940s to the 1970s, it is clear to see that he studied closely and attempted to replicate techniques and narrative concerns from both mainstream and ‘art’ cinema. His fiction films show the influence of Hitchcock, Hammer and the many Hollywood B-movies made in science fiction and horror genres in the 1950s and 60s, but also of Danish filmmaker C.T. Dreyer, German expressionist film, Jean Cocteau, King Vidor and Ingmar Bergman. Terror, murder and dreaming were recurring (and unsettling) themes in his work. Often the characters in Cocozza’s films are ‘possessed’ in some way or forced to confront their true and undesirable selves.

Were he still alive, I’ve no doubt that Cocozza would have had some constructive criticism for me about the video I’ve put together using excerpts from his films. But I think he would have enjoyed the era of social media and the ease of sharing creative material that it offers.

Another filmmaker whose work features in the video is Frank Marshall, who made fiction films starring his family. His genre of choice was usually comedy and while I’m not at all sure what he would have thought of me using his trick films in the compilation, I’d like to imagine he would have appreciated their inclusion as part of a creative endeavour. He (and his wife and children) certainly had a sense of humour.

The attempt to eat a scone covered by treacle will be familiar to many a Scot. This footage (and the part with the witch on a broomstick) was shot by Anne Neely at Castle Toward in 1956.

Finally, I should mention the inclusion of Faces (1959) by Eddie McConnell made while he was a student at Glasgow School of Art. The papier-mache faces (which echo Scottish guising traditions as well as theatre) were made by artist Alasdair Gray and John Mathison and are deliberately uncanny.  Faces is a very accomplished film but it also has a sense of the carnivalesque about it, taking on the Bakhtinian idea of subverting High and Low, perhaps, which is ever present in Hallowe’en activities – and in scary films.