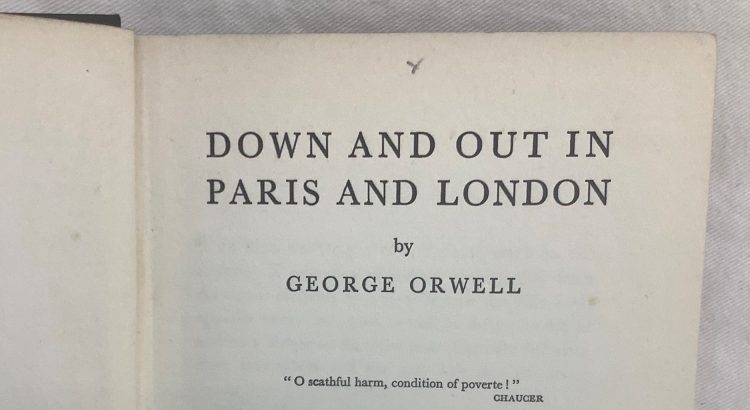 When we were deciding who to include in the National Library of Scotland’s current exhibition ‘Pen names’ we had to be selective. Many authors have used pen names in the United Kingdom in the period covered by the exhibition, 1800 to the present day, but we could only include forty. We decided on criteria for inclusion such as does an author have an interesting reason for using a pen name and do we have a rare and attractive item we can display. As we are in Scotland the exhibition also has a bias towards writers who are Scottish or with a connection to Scotland.

The most striking omission is perhaps George Orwell who just failed to make the cut. We have rare first editions by Orwell in the collections that we could have displayed, and he does have a Scottish connection. His novel ‘Nineteen eighty-four’ was written on the Scottish island of Jura from 1947 to 1948 whilst Orwell was ill with tuberculosis. Orwell also had complex reasons for using a pen name. Too complex perhaps as we would have had to summarise these in fifty to seventy words to fit an exhibition label. Orwell’s biographers have written thousands of words on why he used a pen name without reaching any consensus.

Eric Arthur Blair was born on 25 June 1903 in British India to Richard Walmesley Blair, who worked as a Sub-Deputy Opium Agent in the Indian Civil Service and Ida Mabel Blair who had a French father. He moved to England with his mother when he was one. He attended Eton College and then worked as a police officer in Burma, now Myanmar. Never wholly at ease with himself and guilt ridden because of his privileged life and the inequalities he had seen at school and in the Imperial Police Force he seemed keen to escape both himself and his background. He also disliked his first name because of its then association with Frederic W. Farrar’s popular novel of public-school life “Eric, or little by little.”

In 1927 Blair returned to England from Burma hoping to become a writer. He escaped from his class background by taking on menial jobs in hotel kitchens in Paris and living as a tramp in England to explore what it was like to live in poverty, often taking on an assumed name. These experiences became the basis of his first book “Down and out in Paris and London” published by Victor Gollancz on 9th January 1933. Blair wanted to publish the book under a pen name fearing his parents might be embarrassed by its content. His sister Avril said his parents were more surprised than shocked and felt “it almost seemed like it had been written by a different person,” not their son Eric.

“As to a pseudonym, a name I always use when tramping etc. is P.S. Burton but if you don’t think this sounds a probable kind of name, what about Kenneth Miles, George Orwell, H. Lewis Always. I rather favour George Orwell” Blair wrote to his literary agent in 1932. Luckily so did his publisher Victor Gollancz. “Nineteen eighty-four” by H. Lewis Always just does not have the same ring to it. Eleanor Jacques, a girlfriend, remembers Blair returning from a trip to Ipswich through which the River Orwell runs and saying, “I’m going to call myself George Orwell, because it’s a good sound English name.” Blair admired the writer George Gissing and this seems a likely source for the first part of his pen name.

It has been suggested that becoming George Orwell was a deliberate and life changing transformation for Eric Blair. The casual way he discussed potential pen names and his behaviour after becoming George Orwell do not support this. He was happy to answer to both names. To new friends he was George, to family and old friends he was Eric, though as the years went by, Eric increasingly became George. For a couple of years, he published articles and reviews as both Eric and George. Legally though he remained Eric, signing checks and contracts and getting married under that name. The real importance of George Orwell may have been as an idealised persona, allowing Eric Blair to become the man he always wanted to be. Someone who told truth to power, who had great integrity, honesty, and conviction and was not afraid of plain speaking.

You will not see Orwell in the main part of the exhibition, but you can read striking recent graphic novel adaptions of “Nineteen eighty-four” and “Animal farm” as well as “Nineteen eighty-four : the Jura edition” which has an introduction about Orwell’s time on Jura, in two mini libraries, one for adults and one for children, that complement the exhibition. Here you can also read works by George Eliot, Lewis Carroll, Lewis Grassic Gibbon and Ambrose Parry, and many other writers who do feature in the exhibition.

The library’s exhibition ‘Pen Names’ explores a range of writers working in Britain from 1800 to the present day who published under pen names. It is on from 8 July 2022 to 29 April 2023. For more information see here. For more blog posts about authors who use aliases search #PenNamesNLS.