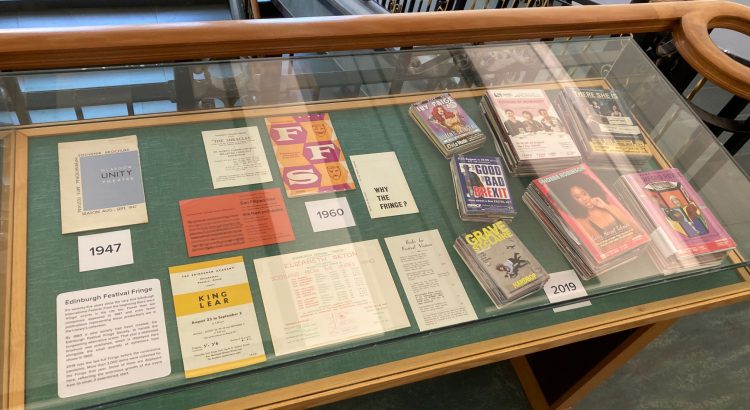 It’s August and the Edinburgh festival is upon us back to its raucous self, more or less, following two years of enforced, relative quiet.

Inadvertently the fringe, still with a small ‘f’, was born. And no one might have imagined in 1947 how massive the Fringe would become.

To mark this anniversary we have embarked on a project to list what we have in the collection relating to the early years of the Fringe. This is not as straightforward as it might seem.

Throughout the late 1940s and the 1950s there was no cohesive organisation overseeing what is now known as The Fringe. There was no central ticketing to speak of, although Rae McIntosh music shop did sell tickets for many shows; neither was there a programme where all the events were listed. Building a collection of material relating to such an event or, more precisely, a series of otherwise unrelated productions, was to prove tricky for the National Library.

Theatrical material at the Library is organised by venue or in the cases of the Edinburgh festivals by the organisation that runs the events. During the first years of the Fringe, no umbrella organisation existed therefore any material arriving at the Library and relating to the Fringe was sorted by venue – although some individual items became ‘stand alone’ material fully catalogued as a single artefact.

The problem, then, in identifying what the Library has starts with what productions were staged and counts as a Fringe event and, most importantly, the venue where it was staged.

Although the Fringe was small in its early years there were still a large number of shows to cover –  especially with no comprehensive listing. Resources such as Alistair Moffat’s 1978 book, the What’s on published throughout the 1950s and the local newspapers are good sources about shows. One laborious task follows another when shows identified as Fringe are cross checked with material stored in relevant collections for venues; and then the catalogue is double-checked on the off chance that a programme or flier for a show is individually catalogued.

The quantity of material in the collection in no way reflects all the performances and productions that took place during the 1940s and 1950s, and this is understandable. The early Fringe’s nature as an amorphous assortment of events by diverse companies and performers, in small venues across the city, with no central structure meant that collecting ephemeral material relating to transient productions was incredibly difficult. As such the Library has less material than would be expected directly relating to early productions. However, given the circumstances, it is impressive how much the Library actually does have.

From 1960 the Edinburgh Festival Fringe Society published its annual programme, bulging with information about performers and shows – and the Library had a name on which to build a collection of ephemera. As such, collecting has in one way become easier, as we know where to go to find material. However, in the early 1960s the number of productions was around thirty – by 2019 there were more than 3,800. Attempting to cover the sheer quantity of material is the new ‘difficulty’. However, the efforts made in the last seventy-five years means we have a collection that is impressive and fascinating. Some of this ephemera is on display in the Library at the top of the main staircase until the end of August.