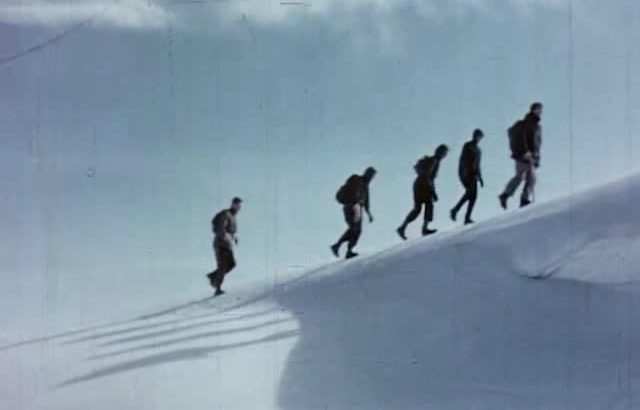 At a time when libraries and cinemas are physically closed, and millions of us around the world are staying at home, the International Federation of Film Archives (FIAF) is encouraging people to explore and enjoy the free film heritage that institutions like the National Library of Scotland provide. With tens of thousands of films to choose from, curators based in cities such as Berlin, Beirut and Milan have been creating 90-minute sampler programmes that weave across international archive collections on topics from dance and industry, to booze and football.

The National Library’s Moving Image Curator, Ann Cameron, has published her own entertaining programme on mountains which takes us to peaks around the world.

Ann said: “Coming from Scotland, ‘The Land of the Mountain and the Flood’, I was drawn into the FIAF archives to find films that would take me somewhere far away from that overly romantic view of mists and heather. I wasn’t disappointed.

“I have arranged 13 films chronologically to encourage you to escape and explore. I discovered some quirky examples of filmmaking in the mountains (try driving a car up one or having a sit-down dinner on a bridge between them!) But what really struck me was the beauty of silence. A lot of the films in this selection happen to be silent, and I am in awe of those early pioneers, lugging their camera into dangerous situations to capture snapshots of a time and place now gone.

“Ascend Mount Hood in Oregon and join a phantom ride through The Lotschberg Tunnel back in the early 1900s at the click of your mouse. Sound features too, of course. For example, the Chilean Spanish commentary on copper mining in the Andes, the unusual music accompanying shepherds in Slovenia, or the intense explanation of rope exercises in the Pyrenees – although I couldn’t always understand them, such soundtracks inexplicably enhanced the experience of watching the films.

“Make sure you stay until the very end to watch an awe-inspiring film that brings together imposing scenic shots with sound and fury. This film, as well as the others before, demonstrate why it is quite unlike any other medium for transporting you to another time and place.

“Finally, a thank you to all the FIAF archives for their careful preservation and documentation of all the films selected in this programme. Without the programme notes and catalogue information the films would certainly not be as meaningful.”

Not enough mountain films for you? Grab your backpack and take the road less travelled with another 14 films from the National Library showing the wonders of the Scottish outdoors, featuring 1940s youth hostels, precarious climbing and the spectacle of 1960s Skye. We hold thousands of films and videos in the National Library’s collections. We collect, preserve and promote access to films capturing Scotland and its people, from the early days of filmmaking to the present day. The Library’s Moving Image Archive holds 46,000 items including film cans, videotapes and digital files – over 120 years of Scotland’s documentaries, regional and Gaelic television, short films and features, home movies and amateur films. All of these collections can normally be accessed at the National Library in Kelvin Hall, Glasgow and, like film archives around the world, we have been working to make as many as possible available to view online.

More broadly, the National Library is an important centre for the study of mountains, mountaineering, and the polar regions and you can read more about our print and ephemera collections, including those on climbing, ecology, geology, hillwalking and the place of mountains in art and literature, on the website. A special feature looks at the achievements of seven pioneering women from the 19th-20th centuries through some of their recollections and items in the collections.