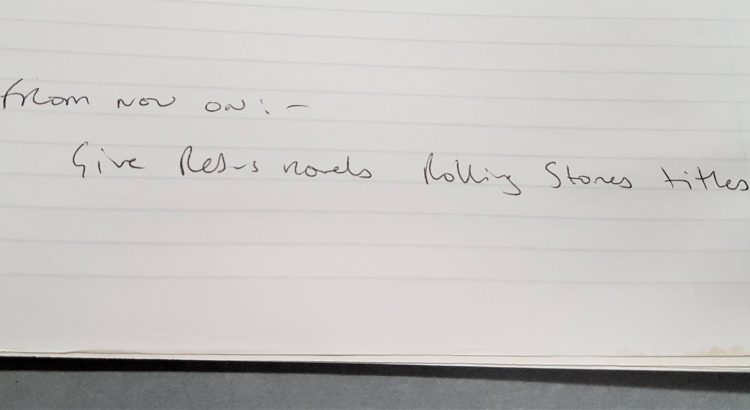 Today marks the 60th birthday of the UK’s number one best-selling crime writer, Ian Rankin. The much-celebrated Fife native is author of over 30 novels, countless short stories, several radio plays, screenplays, poetry, an opera libretto, and innumerable other creative works. He began his writing career at a young age, winning a poetry competition while still in school in Cardenden. 40 plus years later, Rankin has amassed over 20 awards for his writings and contributions to society, including the Crime Writers Association Gold Dagger and Diamond Dagger, the Edgar Award, The Edinburgh Award, and an OBE.

To celebrate Mr. Rankin’s latest milestone, we thought it appropriate to dedicate this post to his other love: music. The writer’s musical career began with his band The Dancing Pigs in 1978, although, according to the author, they played only 6 gigs. Rankin spent several years working as an editor for the Hi-Fi Review from 1988-1990, an experience he recently wrote about for the Library’s 1980s blog series (click here to read his post). Although writing became his main career at this point in his life, Rankin’s appreciation for music continued, and continues, to permeate his creative output. He always has music playing while he writes, and since 2017, he has rejoined the world of rock and roll as a member of six-piece band Best Picture.

Evidence of Ian Rankin’s love of music is not only discernible in his novels, but also in the notes he made while writing them, his correspondence, the interviews and articles in which he has featured, and more. All of these materials are a part of the Rankin archive, which was donated to the National Library of Scotland by the author in 2019. Following the arrangement and cataloguing of this unique and important collection of materials, it will be made available for public consultation at our reading rooms.

The Man and the Music

We begin by wishing Mr. Rankin a happy birthday from The Fab Four. This classic track is from The Beatles’ The White Album, which Rankin mentioned in his Inspector Rebus novel Hide and Seek.

Rankin’s love of music began at a young age, when his older sister got a record player. ‘Double Barrel’ by Dave & Ansell Collins, which features in the Rebus novel Let it Bleed, was the first pop record that Rankin bought. As a teenager a few years later, Rankin was introduced to John Martyn, and counts ‘Solid Air’ as a favourite track.

Rankin’s fictional character John Rebus started his life (on the page) as a jazz enthusiast, listening to the likes of Miles Davis for the first few novels. However, music began to play a significant role in the Rebus novels by the publication of his 1997 Gold Dagger Award-winning novel Black and Blue. By this point, Rankin admits that the cop shared his own musical taste.

Musical groups and tracks are often directly mentioned in Rankin’s novels, whether playing on Rebus’s Hi-Fi or in his car (such as ‘Psycho Killer’ by the Talking Heads in The Hanging Garden, perhaps ironically), or given to Rebus by fellow cop Siobhan Clarke (The Blue Nile in Set in Darkness). However, music also weaves throughout the narrative, setting the scene, or perhaps making a great pun (such as ‘Born to Be Wild’ by Steppenwolf in Tooth and Nail, ‘Small Town Saturday Night’ by Hal Ketchum in Mortal Causes, ‘Buried Alive in the Blues’ by Janis Joplin and ‘Paper Plane’ by Status Quo in Dead Souls). Several bands appear in Rankin’s works multiple times, such Joy Division, Wishbone Ash, Rory Gallagher, and The Velvet Underground.

Rankin utilised the album and track titles of several bands for novel titles, chapter titles, and frontispieces. He pulled The Hanging Garden from band The Cure, and references several other songs by the popular band throughout the novel. The archive holds the correspondence with The Cure regarding these musical references. Rankin has corresponded and collaborated with several musical groups throughout his career; the archive includes correspondence with The Cure, The Bathers, and King Creosote, as well as original lyrics written for St Jude’s Infirmary and Tim Burgess.

The archive also contains letters from fans of Rankin. One particular letter came from a fan who had recently seen Randy Newman in concert and wrote that he thought Rebus would be a fan. A few months later, ‘You Can’t Fool the Fat Man’ by Newman was playing on Rebus’s hi-fi in Rankin’s new novel Exit Music.

Songs written by Fife-born singer songwriter Jackie Leven lend themselves to two novel titles, Standing In Another Man’s Grave and Saints of the Shadow Bible, the former a play on a Leven’s song ‘Standing In Another Man’s Rain’. In a 2013 interview with Orion Publishing, Rankin speaks about how he and Leven became mutual fans of each other’s work, as ‘[Leven’s] songs and my books deal with similar concerns’. These similarities stem in part from their shared backgrounds – Leven’s track ‘Linseed Oil’ reminds Rankin of growing up in a Fife coal-mining village, similar to Leven. This led not only to a friendship, but to the 2005 live performance and subsequent album Jackie Leven Said, where Rankin reads an original short story with musical interludes from Leven.

We reached out to Ian Rankin recently to see what he is listening to at the moment. He sent us four wonderful and uniquely Scottish tracks:

To wrap up the celebration, we’re back to the Rolling Stones. Mr. Rankin recently opined that “You Can’t Always Get What You Want is an extraordinary way to finish an album” (2019, Sunday Post), so we hope it’s an acceptable way to end this playlist as well.

Stay up to date with the project and future promotional events by following @nlsarchives on Twitter!