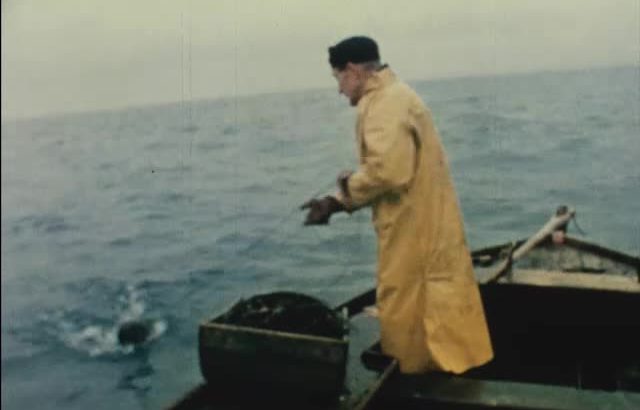 ‘’There are 24 hours in the day and every one of them is for fishing.’’

Films are often factual historical documents providing evidence, not simply of working practices, but how people lived and what life was actually like.  Audiovisual records can contain inherent bias or a particular audience or message that they want to deliver, and this should always be kept in mind. Whether emotive, nostalgic, informative or simply an unexpected pearl dredged up in a catalogue search, this blog offers an introduction to a range of content about fishing and the communities that surround this important Scottish way of life.

‘’The shoals are rich and there’s danger for them everywhere… from the air, from under the sea, and, most dangerous of all, from man.’’

The toil and hard work involved in this type of fishing is recorded on moving image and sound in a way not even a photograph can fully capture. The camera bears witness to the sheer scale of an industry in its heyday and to its decline.  The earliest fishing-related footage in the Library is preserved on Kinora Reels. This forms a tantalising glimpse of Wick’s fishing community over 120 years ago, in the days before commercialised fishing took hold. Watch this short compilation featuring sail drifters entering the harbour during the summer season, the hustle and bustle of the harbour and fishermen ‘redding’ the nets in preparation for another day at sea.

Films such as Caller Herrin’ (1947), North Sea Herring Fleet (1935) and Journey to Scottish N.E. Fishing Ports (1949) also depict the herring industry and the communities built around it, following imposing steam drifters around the east coast, from Lerwick to Lowestoft.  Sponsored public information films, such as Caller Herrin’ (1947), produced by the Central Office of Information for the Scottish Home Department, offer an informative, positive picture of the post war economics of the fishing industry. With the passage of time they can also be seen as advocating working practices that may have contributed to over-fishing.

Equally important records made by amateur enthusiasts exist in the collection with sequences often tucked away on longer compilation reels of mixed film stocks and time periods spliced together. Stornoway (1939) was made by Musselburgh resident Alex Lowe and contains a beautiful sequence of the fishing fleet, with the Fisherrow folk out to see its departure. This was captured on rare early colour 16mm film. The annual voyage of the Musselburgh herring fishing fleet would progress via the Forth and Clyde and Crinan canals to reach the west coast fishing grounds as far as Skye for the start of the season.  Films like this not only record the boats and the fishermen, but capture a whole community stopping in time to participate in the customs involved in the departure of the fleet… from toddlers to grannies!

Around Wick Harbour (1937) features beautiful early colour footage of the bustle of the fishing fleet as the steam boats unload the catch, and the herring is salted, gutted and packed.  It packs a punch at just eight minutes long and was  justifiably singled out at the Scottish Amateur Film Festival of 1940, with more than a few echoes of John Grierson’s Drifters (1929).

Fishing was, and still is, an integral part of everyday life in many areas of Scotland. Community life is celebrated by familiar calendar customs such as the crowning of the herring queen, offering thanks for the bountiful sea harvest. Herring Queens can be glimpsed in assorted films preserved in the archive.  These range from the Shetland Queens (Bernera, South Lochs, Uig, Leurbost, Carloway, Ness, Back, Shawbost and Point) to the Carnival Queen of Lewis, various Herring Queens in Wick, Eyemouth Herring Queen celebrations (as recently as 1986), and a 16mm film with added soundtrack devoted entirely to the celebrations around the coronation of the ‘Port Seton Queen’. Riding of the Marches and Gala Queen, Musselburgh (1935/1952-1954) includes a record of the Fisherman’s Walk in Musselburgh, complete with ‘shell-shaped meringues’.

Ullapool Harbour and Fishing 1961  This silent 8mm film was made by James McIntyre (a draper who lived in Ullapool most of his life) and acts as a quiet witness to everyday life in the harbour.  There is the fleet anchored in harbour, the landing of the catch. There are fishwives salting fish in wooden barrels, and an amazing elevated shot of their expansive working area, barrels stacked high.

Fishing Fleet (1939) is a good example of a localised record of fishing activity, this time in Lossiemouth in Moray, and it was shown to a packed public hall after completion in the town. It offers a view of local fish prices in Lossiemouth as well as the numbers of boats, fishermen and ‘other persons’ working out of the harbour at that time.  As well as depicting a harbour crammed full of fishing boats and activities, it shows more personalised local snippets, such as boys (including the filmmaker’s nephew) playing with hand-held nets. It ends rather poetically with the intertitle ‘’and in the faint early dawn the fleet sets its daily course to enact yet another epic of labour’’.

Last Fisherman (1958), Trawler Town (1960) and Haddock Fishing (1941) show how powerful film can be at recording a place in time.  The first concerns the precarious art of line fishing in the north east, as seen through the eyes of Norman Grant of Collieston.  The second features a thriving Aberdeen Harbour in 1960.  The final film is a concise five minute record of hand line fishing from coble boats in Orkney, made by William Kirkness, handicraft teacher, filmmaker and antiquarian.

There are a number of fishing-related educational films in the archive. These often reflect activity on a smaller scale. In Dee Valley (1959), made by the Scottish Educational Film Association’s Aberdeen Group, we go on a journey with Maria and Michael, starting with steam trawlers in Aberdeen Harbour, fishing for salmon on the River Dee, then finally surprised by wriggling eels bound for London.

Other educational films such as Creel Fishing in Scotland (1960) show the lives of crofters on the West Coast.  Not only are they skilled fishermen laying wooden creels for crab and lobster, but they tend the land and run the post office in their spare moments!  Salmon Fishing in Skye (1938) and Kippers (1952) are other good examples of this genre.

‘They’re just scrapin every little fish in the sea’  … ‘and yet, they’re still nae content wi their money’  Last of the Hunters (1986). This documentary from Grampian Television details the fishing industry of the 1980s, discussing such topics as changes in technology, quotas, Polish fishermen and fishing on the Sabbath.

Shark Fishing (1940). One of the least likely places for a basking shark – Carradale Harbour in Argyll!  Illegal ring net fishing by daylight and smelly shark blubber feature in this interesting home movie shot on 9.5mm.

Shoals of Herring (1993). A ballet performance in four movements by Scottish Ballet, this video recording is believed to be a school’s matinee performance featuring songs and dance connected with fishing communities, from Gaelic waulking songs, to ‘diddles’ from Banffshire.

Watch free films about fishing from across the UK’s Film Archives on the British Film Institute’s player, including a strange new genre of Sea Wave Films.

Scotland on Screen Fishing resource, with film from the moving image archive tailored for education

Join us online as we fish for films

If this blog has whetted your appetite, view Curator Ann Cameron’s online talk, Fishing for Films in our Moving Image Archive via our Youtube channel. This online event takes place at 2pm on Friday 18 June. You’ll see a reel of fishing films and learn about our Moving Image collections. Sign up for a free ticket (via Eventbrite).