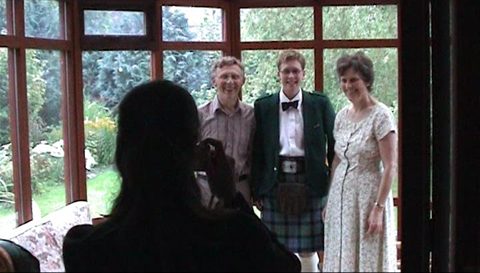 At the Library’s moving image collections at Kelvin Hall,  we have the real hidden gem that is ‘Funny Kinda Guy’ (2005), which we are screening for this year’s LGBT History Month: Blurring Borders – A World in Motion. This touching and musical feature-length documentary, directed by Travis Reeves, follows musician Simon de Voil through the beginnings of his medical gender transition. We journey alongside him for 18 months from Scotland to Australia, becoming intimately involved in these shifts of body and identity. We hear about what it all means to Simon, as well as the personal histories with his partner, parents and growing up trans.

Watching the film, Simon’s wistful countdown is quickly brought to light: his alto singing voice that has been so cherished in his music will be lost, or shift, forever due to taking testosterone – a sacrifice he is willing to make to feel more at home. The film is conveniently spliced with his band’s catchy music and singing, uplifting the emotional resonance for audiences even more. This synopsis soon steps back and there comes about emotional connections affected by Simon’s history and future: a love story between Simon and partner Rowena. A family portrait – the openness and acceptance of Simon’s parents, actively supporting his transition. There is a particularly adorable scene of Simon’s dad helping him administer hormone injections, Simon seeming too scared of the needles.

Simon himself recently said “when this film was made there was almost no information publicly available about the experience of being transgender and the process of gender transition”. Interestingly the film feels poignantly relevant as ever to today’s urgency for transgender representation on screen. Issues around this are now highlighted to mainstream audiences, such as the powerful 2020 Netflix documentary ‘Disclosure’, which seeks to dismantle the negative portrayals of trans people on screen, offering solutions to these long-standing damaging effects.

As much as ‘Funny Kinda Guy’ would have made an impact through its representation of transgender men alone in 2005, the same could ring true now for its heartfelt intimacy with its subject. For what is a documentary about the transgender experience, much of the ‘politics’ around it are avoided and this works to its advantage. This is a portrait of Simon’s journey and his only, with the unconditional love from his family.

Join us at the National Library of Scotland at Kelvin Hall on Wednesday 23 February at 6pm to watch ‘Funny Kinda Guy’ on the big screen. Tickets are free but should be booked through this Eventbrite.