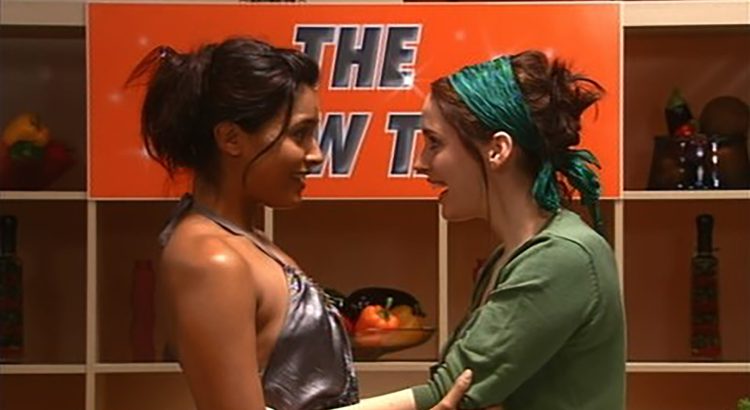 The Library’s Moving Image Archive at Kelvin Hall aims to collect films of historical value and that represent the diversity of people living and working in Scotland, as well as historical and ongoing development of screen practice in Scotland.

Despite this wide scope, there’s much to be said about what’s missing. As inclusion of all identities and communities is a growing demand both nationally and internationally (and rightly so), we are conscious that the representation and creative output of specific groups in our collections is sparse – for example people of colour, LGBTQ+ communities, and people with disabilities.

Here, we can touch upon the LGBTQ+ representation that’s within the Moving Image Archive. ‘Coming Out’ (1983) and ‘Highlanders Too’ (1997) are two self-evidently queer TV documentaries that possess a rich sense of historical attitudes towards LGBT people in Scotland.

‘Coming Out’ immediately hits us with its on-street interviews capturing the Edinburgh public’s strongly homophobic opinions of the time, with the odd example of reluctant acceptance. Local gay and lesbian folk brave enough to be on camera tell us of their experiences, and what resources or meeting places are available to them. Watching this film is bittersweet – it shows how far we’ve come, yet the prevailing prejudices and probing of the perverted stereotype in ‘Coming Out’ can feel familiar to the ‘up for debate’ displays of transgender people’s existence we see today.

‘Highlanders Too’ takes audio interviews with gay men and makes them live action reconstructions. Depicted are the suppressive pressures of being gay in the Highlands, where it hasn’t quite caught up with the freedoms of the big cities. The men closet themselves and take concealing measures for dating or expressing their true selves. Or even worse: avoid conversion therapy insisted upon by their families.

Moving on to auteurs out and proud – we hold films by Pratibha Parmar, notably her only feature film, the lesbian rom-com ‘Nina’s Heavenly Delights’ (2006). Two of our Scottish Ballet’s 2019 digital season films draw on queer creators. ‘Frontiers’, a film that subverts traditional ballet gender roles is choreographed by Myles Thatcher. And ‘Haud Close Tae Me’ is narrated with a poem by Jackie Kay. We have also newly acquired ‘Man for a Day’ (2012), a workshop documentary by the late performance artist and legendary drag king Diane Torr.

And then we have more discreet connections. ‘Edwin Morgan and His Poetry’ (1979) was released long before his official coming out in 1990, and the proclamation that his earlier work was in fact ‘gay’. The poem ‘Glasgow Green’ (1963) recited in this film – thought then to be about violence – is now interpreted to be quite clearly about gay cruising[1].

Or the assumed knowledge of an artist such as Enrico Cocozza – believed to be gay or bisexual, though we cannot know how he would identify himself today[2]. You could read most of Cocozza’s filmography now through a queer lens. In particular ‘Bongo Erotico’ (1959) for its half-naked writhing bodies in striking underwear, one man cradling another, and Cocozza himself acting as a devilish presence.

We also find Joan Eardley working in ‘Three Scottish Painters’ (1963). Eardley’s sexuality was ever so slightly speculative, not featured in her work, or this film, yet arguably evidenced elsewhere in posthumously revealed letters. The Library holds her letters to Audrey Walker, more illustrative in nature, providing us scenarios for larger queer perspectives to take hold across the Library’s collections.

We hold videos from OurStory Scotland, who collect oral histories and personal testimonies of LGBT people in Scotland. Audio recordings and other materials from this collection are held at the Library. If you wish to find out more, contact manuscripts@nls.uk.

Some glimpses of queer signifiers are completely minuscule, like a Pink News poster seen on a bedroom wall in ‘Scottish Women’s Football Association Collection’ (1970s). Yet these are still important examinations to make. They bring to light what’s already there and give hope for more representation to take place across our archives.

“How can I see these films?” We will digitise these films this year and make them available for viewing at our buildings – either at Kelvin Hall or at George IV Bridge in Edinburgh.  Some films already exist on DVD and other formats at Kelvin Hall so please get in touch if you are interested in anything particular by emailing movingimage@nls.uk.

We recently wrote about another LGBT documentary from the archive, ‘Funny Kinda Guy’ (2005), in this blog post.