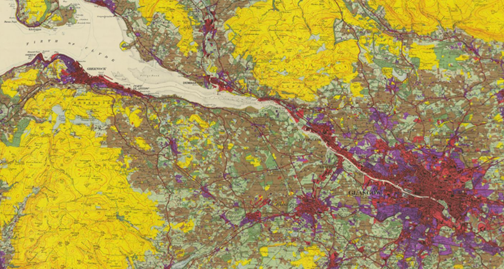 More than a third of the population of Scotland live within the River Clyde catchment area. The area most at risk to sea level rise is within the area defined by SEPA as ‘Glasgow Coastal’ which runs along the river from the heart of the city of Glasgow to the Firth of Clyde but also incorporates the tributaries of the rivers White Cart and Black Cart and so includes the areas around Paisley and Renfrew. It includes businesses as diverse as Glasgow Airport and Braehead shopping centre.

A new and exact map of the River Clyde done by the late Mr. John Adair / now publish’d for the good of the publick by Geo. Scott, 1731.

Sustainable, coordinated management of the Clyde Marine Region by Clyde Marine Planning Partnership, 2017, as saved in the Web Archive.

Comparative sections of Clyde, opposite Estates of Erskine 1835 and 1880, from the Stevenson Collection [Library reference MS.5846/ 72]

Clyde navigation : Map of the river and firth of Clyde from Carmyle to Gourock / compiled by Messrs. Kyle, Dennison and Frew … from Ordnance and actual surveys, 4th Aug. 1883.

Climate Change Adaptation Progress Report for Glasgow Airport. 2016. Available to read in the Library; UK legislation regulates access to this resource, available on Library computers in our reading rooms and public access centre.

Page from a journal of a tour of Scotland kept by Miss Sarah Taylor of Birmingham, describing a visit to Glasgow, with engravings of Broomielaw Bridge and Glasgow Harbour and sketch made while waiting for the steamer to Greenock, 1842. [Library reference MS.8927, ff.139v-140r]

Page from a journal kept by Alexander Kennedy, emigrant from Greenock to Australia, 1878. describing his departure upon the steamer ‘Hero’. [Library reference Acc.10673, f.2r]

Recovering the Clyde. Scottish Environment LINK, 2014. Available to view onsite at the Library.

Map of the basin of the Clyde including Renfrewshire with the greater part of Lanarkshire and Ayrshire … from a survey by James Knox … (Engraved by Jn. Muir [and] W.H. Lizars), 1837.

Land Utilisation Survey, Sheet 72, Glasgow, 1940. The key clearly shows the wide variety of land use in the area from industry through nurseries to rich farmland and woodland.

Industrial Clydeside ,1938.This film shows the industrial development of Clydesdale, including its iron and steelworks, textile mills and shipbuilding

The River Clyde. 1954. The river from source to sea; farming and fruit growing in the Lanarkshire countryside and the river’s traditions of heavy industry and shipbuilding.

A History of the County of Renfrew from the Earliest times by W.M.A. Metcalfe, 1905.Includes a short chapter on the industries of the area including dying, printing and engineering.

Town Plan of Greenock, Ordnance Survey, surveyed 1857 at a scale: 1:500 in 20 map sheets. The large scale plans show the docks and manufactories around the shore associated with the shipbuilding industry, including dry docks, chain cable shops, and forges.

Plan of the castle at Dunbarton circa 1760?

Plan of part of the North-end of Dunbarton Castle; with two different Designs, and proposed situation for a Barrack to accommodate a Company of Foot; also a Project for rebuilding the Wall near the One Gun Battery by Henry Rudyard, [1788].