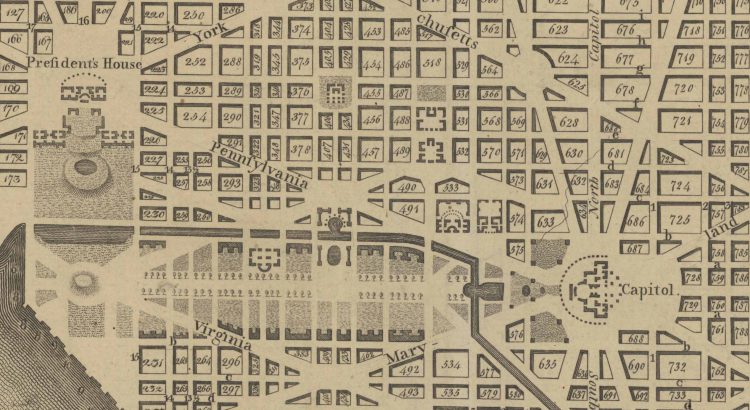 Planning of a New “Federal City”

After the success of the American Revolution, Americans were faced with a decision: where to build their capital. In a foreshadowing of future conflict, the main debate was whether this monumental city should be built in the North of the South. The South was unhappy with economic decisions after the recent war with the British. To gain their support, a compromise negotiated mainly by Alexander Hamilton, James Madison, and new Secretary of State Thomas Jefferson saw a plan for a new capital city located between Maryland and Virginia, two Southern states. This area was known as the Territory of Columbia. While technically in the South, this location was nationally central. It also had the advantage of being linked to the sea by the Potomac River. This map details water depth to indicate navigability.

The Designers of the Capital

President George Washington appointed Major Pierre Charles L’Enfant to design the capital city, aided by three commissioners. L’Enfant was a French architect who had fought in the Revolutionary War for the Americans. His plan revolved around wide diagonal avenues overlaying a grid system. Pennsylvania Avenue acted as a connector between the “President’s House” and the “Congress House”, which would house the legislature. L’Enfant also included central squares and elevated areas for national monuments and memorials.

Although L’Enfant completed his plan in 1791, he was dismissed before its final approval due to his quarrels with commissioners and inability to compromise. At this point, Andrew Ellicott stepped in to revise, complete, and submitt the plan. His revisions included the changing of the “Congress House” to the “Capitol”, the removal of several open spaces, and the straightening of several avenues and smaller previously arced lines.

The plan depicted here was engraved by Thackara & Vallance in 1792. Multiple editions of this plan were printed in the United States, Paris, and London, and the city design soon became widely recognisable. Susan Schulten writes how, in the years and decades that followed, “the map of this new planned city was a fixture of popular culture, and a symbol of national independence itself.”

The city now looks different from this original design, mainly from changes made after 1900 including wider streets and the lengthening of the mall.

A Note on Metadata

Although this city is widely known as simply “Washington”, the distinction of “D.C.” is important. The City of Washington was originally proposed as a “Federal City” to be developed within the Territory, later District, of Columbia. Thus, it is known as Washington, D.C., as opposed to Washington by itself, which is the name of a state in the Pacific Northwest. The same distinction is made between New York City and New York, the state. These distinctions are important to make when cataloguing material to best help users find material. The Subject field contains this information in the case of this plan. The relevant subject here is ‘Washington (District of Columbia), which is a subject heading set by the Library of Congress (which, coincidentally, is located in Washington, D.C.).