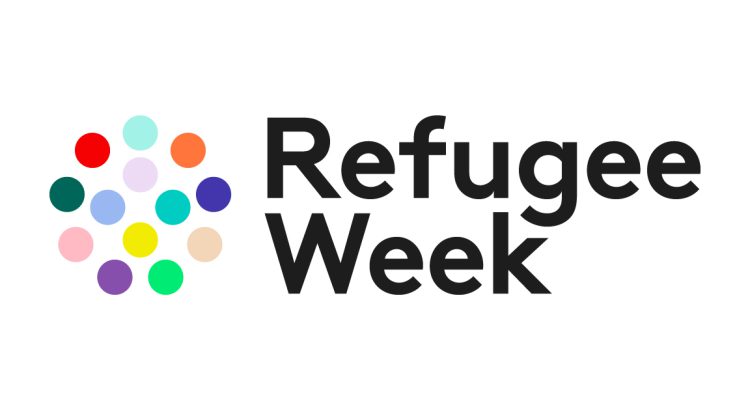 Scotland has three official languages, but countless others have echoed through its streets and floated over its airwaves. From poetry to protest chants, the speech and song of the immigrants and refugees who have made their homes in Scotland have enriched the soundtrack of Scottish life.

Pause for a moment to imagine the long-gone soundscape of Glasgow’s Gorbals in the early years of the 20th century. The Gorbals was home to many Jewish immigrants from Eastern Europe, before the demolition of crumbling old tenements and redevelopment changed the face of the neighbourhood. Latvian journalist and author Chaim Bermant describes his experience of moving to the Gorbals as a child in 1937:

the Gorbals, somehow, was less intimidating than other parts of the town for it reminded me vaguely of Dvinsk. There were Yiddish posters on the hoardings, Hebrew lettering on the shops, Jewish names, Jewish faces, Jewish butchers, Jewish bakers with Jewish bread, and Jewish grocers with barrels of herring in the doorway. The herrings in particular brought a strong whiff of home. One heard Yiddish in the streets – more so, in fact, than English – and one encountered figures who would not have been out of place in Barovke. [1]

To hear some of these sounds for yourself, visit the Foreign Sounds project, where you can listen to Scottish Jewish recordings from the early 20th century. Or check out Gathering the Voices, an audio-visual collection of stories from Holocaust refugees with connections to Scotland. There you can hear Esperance David speak about the pogrom against the Jews of Baghdad, or listen to the story of George Taylor’s childhood rescue from the wrong Glasgow train station by a Yiddish-speaking taxi driver.

The Library’s Moving Image Archive also records refugees’ experiences upon arriving in Scotland.  To mark Refugee Week, the Library will be screening ‘Escape to Freedom’ at 2pm on Friday 24 and Saturday 25 June (book via Eventbrite).

This amateur documentary offers insight into the experiences of Vietnamese families fleeing the Communist regime after the Vietnam War and the fall of Saigon in 1975. More than a million people were displaced, many travelling by sea in small boats to escape persecution. Filmed in super 8 format by Lanark Cine Club in 1981, the film records the arrival of several of these families in Lanarkshire, before their eventual resettlement in various parts of Scotland.

The Moving Image Archive also contains imaginative portrayals of the experience of displacement, like the ‘Tartan Short’ Narance (1994). Narance explores the trauma still experienced by Manya (played by Katrin Cartlidge, opposite Scottish actor and filmmaker Peter Mullan) 20 years after losing her family and home. Another short film in the archive is The Flight of the Sand Martin (2008). Made by refugees and Lanarkshire locals working together, it parallels a refugee’s journey to Scotland with the voyage of a bird migrating to Africa.

Complementing the Library’s collections are projects like Colourful Heritage, a multimedia archive which offers the chance to watch, listen and learn about the history of South Asian communities in Scotland. In this clip, Colourful Heritage founder Omar Shaikh introduces viewers of BBC Alba’s Gaisgich sna Glinn to the history of the all-Muslim Punjabi military regiment, which operated in Scotland during the Second World War. Another fascinating resource is The Tape Letters project. This documents the practice of sending and receiving messages on cassette tape, popular among Pakistanis who migrated and settled in the UK between 1960 and 1980.

The efforts of New Scots to adapt to life in Scotland and to its languages are also documented in the Library’s printed collections. She Settles in the Shields records the untold stories of migrant women in Pollokshields. Shafqat Sabir describes the difficulties she and her family experienced following their migration from Faisalabad in Pakistan in 1966:

My parents found it very difficult as neither of them knew English and that was a barrier difficult to break, as there was no encouragement or places to learn English. I remember there used to be a short programme on TV called ‘Look, Listen and Speak’ […] and my parents used to watch this to learn; it was the only Asian language programme on at the time. It used to come on for half hour and I remember my parents used to wait for it to come on so that they could learn. The presenter would say a sentence in Urdu and then translate it into English.

The sound recordings, films and oral history interviews described in this blog give a small introduction to the wealth and vibrancy of Scotland’s multilingual history and present.

In part two of this blog, we will look further at how the Library’s collections reflect the history of Scotland’s immigrant and refugee communities.