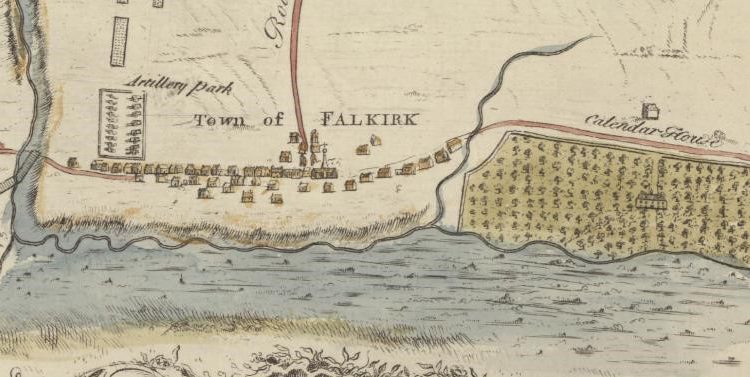 The Falkirk council area was formed in 1996 when the Central Region was divided into several parts. Falkirk boasts many varied attractions from the ruins of the Antonine Wall, Callendar House and Blackness Castle to the engineering feats of the Forth and Clyde Canal and the Falkirk Wheel. More recently it has become famous for the iconic Kelpie statues and The Helix park.

The area is closely associated with industry and engineering but is also known for two significant battles with English forces. The first occurred on 22 July 1298 and ended with a decisive English victory that forced William Wallace to resign as Guardian of Scotland. By contrast the Battle of Falkirk Muir on 17 January 1745 is often seen as the last great victory of the Jacobite rising of 1745.

The Battle of Falkirk January 20, 1746 [In The Spread of Scottish Printing. A reprint of an account of the battle from the Caledonian Mercury, told from the point of view of “His Majesty’s (i.e. George II’s) forces”.]

The Generous and Noble Speech of William Wallace of Elderslie at the Battle of Falkirk, 1706 [In Word on the Street]

Two thousand and one paces: a newsreel of Bonnybridge by Rev. John Jackson, 1983. [An amateur newsreel about Bonnybridge in the early 1980s. The film features children walking for the bus, the annual Scout camp at Barrwood, clearing the banks of the Forth and Canal, and the Bonnybridge Gala celebrations, complete with crowning of the Gala Queen.]

Inventory for Dep.260 Papers of the Beneficent Society of Bo’ness, 1721-1957. [In Catalogue of Archives and Manuscripts.]

Christ our Righteousness, by Rev James Renwick, 1745. [In The Spread of Scottish Printing. Printed by Daniel Reid who established a successful printing business in Falkirk in 1766, which then moved to Carron in 1784. Reid was one of the most significant printers of chapbooks in 18th-century Scotland.]

Good News to Scotland, by Richard Cameron, 1776 [In Chapbooks Printed in Scotland.]

The harmony of the divine attributes displayed in the redemption and salvation of sinners by Jesus Christ. Being a sermon preached at Dunfermline, upon the 29th of September 1724 by Ralph Erskine, 1783. [In Chapbooks Printed in Scotland.]

Admiral Sir Charles Napier , 1875. [In The Biographical Dictionary of Eminent Scotsmen. A short biography of the prominent naval officer and Liberal MP born near Falkirk. He served in the War of 1812, the Napoleonic Wars and the Crimean War.

Sir William Forbes of Callendar(?) by J. Jenkins, 1803. [In Edinburgh Characters by J. Jenkins. Forbes was a prosperous coppersmith and landowner who lived in Callendar House in Falkirk.]

Lament of Williams Wallace after the Battle of Falkirk, 1299, compiled by Robert Archibald Smith, 1823. [In Glen collection of printed music]

Falkirk is famous for its 30-metre-tall sculptures of two horses’ heads known as the Falkirk Kelpies. Read more about kelpies in Scotland here: Peat-fire Flame by Alasdair Alpin MacGregor, 1837 [In Ossian Collection]

Manuall Nunnery, 1784 [In Hutton Drawings. The Manuall, or Manuel Nunnery was a Cistercian house founded in 1156 by Malcolm IV. Most of the building has now been destroyed and only one wall is still standing.]

Part of the Antonine Wall runs through Falkirk. The Antonine Wall was a turf construction begun in 142AD, 160 km north of Hadrian’s Wall in an attempt to extend Roman control.

Plan shewing the situation of the Roman Station Camelon … by William Roy, 1793. [In Military Antiquities of the Romans in North Britain]

The Antonine Wall by Prof. Anne S. Robertson, 1956-1960. [In Moving Image Archive. Film of two men walking the route of the wall.]

Falkirk has an unusual link to an unexpected foodstuff: the pineapple. In Dunmore Park which lies between the villages of Dunmore and Airth, is the eighteenth-century folly known as the Dunmore Pineapple. Built for John Murray, 4th Earl of Dunmore the roof of the hothouse is immediately recognisable…

Interior view of corner of N room at Kinneil House, Bo’Ness, after restoration, 1940 [In Canmore: the national record of the historic environment, Historic Environment Scotland]. Kinneil House was built in 1553 and was saved from demolition in 1936 when a series of 16th century murals were discovered.

Oblique view from SSE along E side of Falkirk Wheel Union Canal aqueduct, with empty canal basin in foreground, and visitor centre, 2001. [In Canmore.] Opened in 2002 the Falkirk Wheel is a rotating boat lift that connects the Forth and Clyde canal and the Union Canal. When the wheel was opened the two canals were connected for the first time since the 1930s.

The fifteenth-century castle at Blackness is iconic for its unusual shape, with a pointed stem to the north that projects into the Firth of Forth and three towers that resemble masts. It is known as the “ship that never sailed” and was also used as a prison, a garrison and an artillery depot in its long history.

Plan of the Castle of Blackness by Theodore Dury, ca. 1690. [In Military Maps of Scotland (18th century)]

For more on the Dunmore Pineapple

A recording about ice cream parlours from Scotland’s Sounds

The Passing Hour : The Magazine and Chronicle of the Stirling District Asylum, 1901. [Bellsdyke Hospital, Larbert]