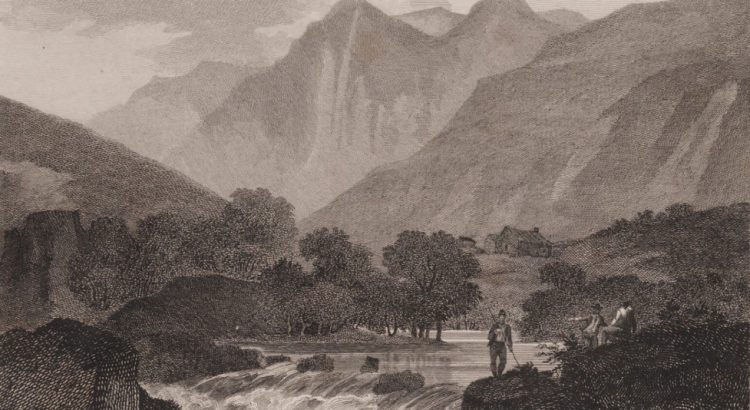 The Highland Council unitary authority is the largest by area in the UK, covering a third of Scotland’s land area, and 11% of the UK’s. Although it is the 7th largest council in Scotland by population, it has the lowest population density in the country. Its administrative centre is Inverness, but there are a number of other towns in the area, including Ullapool, Fort William, Wick, Thurso and Dingwall. It contains the Cairngorms National Park, the largest National Park in the UK, as well as many of the highest mountains in the UK. There are almost 5000 miles of coastline in the area, including many islands such as Skye, Eigg and Rum.

The Highlands are one of Scotland’s best known regions, famous for its dramatic landscape, hospitality and water-dwelling monsters. The area is associated with feuding clans, Jacobite rebellions and Gaelic culture, but also the oil and fishing industries, tourism and outdoor activities. All of these aspects of the area and more are reflected within items in our collections.

Recollections of Inverness, by Robert Munro, 1870. https://digital.nls.uk/antiquarian-books-of-scotland/archive/109004405 This book contains a mixture of local history and anecdotes about the town of Inverness in the 18th and 19th centuries.

Kingussie vs Newtonmore, 1934. https://movingimage-onsite.nls.uk/film/1972  This silent film shows a Camanachd Cup shinty match between Kingussie and Newtonmore which was abandoned due to a pitch invasion by supporters. The traditional sport of shinty is still widely played the Highland area today.

Power for the Highlands, 1943. https://movingimage.nls.uk/film/0279  This propaganda film for the introduction of Hydro-Electric power to the Highlands shows examples of social concerns of different groups in the area at the time – crofters, fishermen, estate workers.

Highland Folk 1962. https://movingimage.nls.uk/film/2238  This short film about traditions of the Highlands visits the Highland Folk Museum in Kingussie. This museum still exists, although it is now located in Newtonmore. The film also shows recordings being made of traditional Gaelic songs on Skye, and discusses Highland Games.

Ahead of Schedule, 1974. https://movingimage.nls.uk/film/4209  This film from the 1970s show the production of oil drilling structures in Nigg, Easter Ross, highlighting the heavy industry that isn’t always included in the typical view of the Highlands.

Wick Society Kinora Reels Collection, filmed by John G. Humphrey?, 1897-1910 https://movingimage.nls.uk/film/4627 These reels contain local scenes and events. The earliest were the first ‘living pictures’ to be screened in the North.

Sruth, 1967-1970. https://digital.nls.uk/126160454 A bilingual newspaper of current events in the Highlands and Islands and in Scotland published by An Comunn Gàidhealach.

Papers of the Sutherland Estates – https://digital.nls.uk/catalogues/guide-to-manuscript-collections/inventories/acc13290.pdf

These inventories detail some of the contents of our manuscript collection of the Papers of the Sutherland Estates. The Sutherland Estate is one of the most well known in Scotland, not least due to its association with the infamous Highland Clearances of the 19th century. The collection includes legal papers, accounts, estate maps, leases and more.

SCRAN or Scottish Cultural Resources Access Network https://www.scran.ac.uk/  SCRAN contains over 400,000 images and other media from museums, archives and galleries, including over 7000 results for a search of ‘highlands.’

British Newspaper Archive – https://www.britishnewspaperarchive.co.uk/  The British Newspaper Archive is a full text digital archive of regional and national newspapers from the 18th to the mid 20th century. It includes local papers from the Highland region such as the John O’Groat Journal, the Inverness Courier, the Ross-shire Journal, the Caithness Courier and many more.

Simon Fraser, 11th Lord Lovat, has the distinction of being the last person to be publicly beheaded in Britain. He was 80 years old when he was executed at Tower Hill in London in 1747, for his part in the Jacobite rebellion of 1745. He was nicknamed ‘the Fox’ for his cunning and frequent changes of allegiance and his family seat was near Beauly in Inverness-shire. Our collection of Jacobite Prints and Broadsides contain many images of Lord Lovat in the build up to his trial and execution and an account of his eventful life can be found in the History of the Frasers of Lovat by Alexander Mackenzie.

Lord Lovat as he appeared at the time he was taken. https://digital.nls.uk/jacobite-prints-and-broadsides/archive/75241358

History of the Frasers of Lovat, by Alexander Mackenzie, 1896 . https://digital.nls.uk/histories-of-scottish-families/archive/96579200

Ceòl Nan Gàidheal – https://digital.nls.uk/learning/ceol-nan-gaidheal/gaelic/index.html  Our Ceòl Nan Gàidheal resource, available in Gaelic or English, explores traditional Gaelic music, its instruments and history. It includes printed music and audio recordings. The song linked below is included in the resource.

In Search of the Loch Ness Monster, 1976. https://movingimage-onsite.nls.uk/film/5797  The Loch Ness Monster is the most famous mythical creature in the Highlands, if not the whole of Scotland. Although there is mention of a monster in Loch Ness in Adomnan’s Life of Columba, written in the 7th century CE, modern interest in a monster dates from the 1930s. The above film, available onsite at the Library’s reading rooms, is an American documentary from the 1970s which shows Nessie hunting and interviews locals who claim to have seen something.

The Prophecies of the Brahan Seer, by Alexander Mackenzie, 1878. https://digital.nls.uk/early-gaelic-book-collections/archive/81545665 The Brahan Seer, also known as Kenneth Mackenzie or Coinneach Odhar, lived in the 17th century and made predictions by looking through a stone with a hole in the middle. There is no historical evidence that the Seer actually existed, and he is thought by some to be a creation of Alexander Mackenzie, the author of the above book. His prophecies, which supposedly relate to the Battle of Culloden, the building of the Caledonian Canal and the discovery of North Sea Oil, make for interesting reading nonetheless.

Fort George was built near Ardersier in the aftermath of the 1745 Jacobite Uprising, as part of the effort to subdue the Highlands. It is virtually unchanged today and has been in continuous use as an army barracks since its completion in 1769. We have a number of maps and plans of the Fort available here:

Plan, Elevations and Sections of the Store-House for Provisions, and Barrack-Masters Stores 1762 – https://maps.nls.uk/view/00002865

Although Scots Porage Oats has long associated the image of a kilted shot-putting Highlander with porridge and oatmeal, it was actually produced in Glasgow. In the Medieval Highlands, bere and barley were more commonly cultivated than oats, which only became more widespread after 18th century agricultural improvements. Here is a porridge recipe anyway –  https://digital.nls.uk/recipes/themes/oatmeal/porridge.html

Dunrobin Castle – https://digital.nls.uk/pencilsoflight/searchDetail.cfm?startRow=1&totalRows=3&startRowNext=2&rowsPerPage=1&startRowBack=0&localArea=Sutherland&country=0&photographer=0&keyword=0&highlight=0&talbotype=0&flag=1  This 19th century image is of Dunrobin Castle in Golspie, the seat of the Dukes of Sutherland. Although a castle has stood on the site since the 15th century, most of this building was created between 1835 and 1850. An image of the castle was used in Stanley Kubrick’s 1975 film Barry Lyndon, to represent a French chateau. It was also briefly repurposed as a boarding school in the 1960s and 1970s before opening to the public in 1973.

‘The Prospect of Ye Town of Innerness,’ from Sleezer’s Scotland, by John Sleezer, 1693.  https://maps.nls.uk/view/91169199   This engraving shows Inverness as it would have looked at the end of the 17th century, with its castle and waterfront looking very different from today.

Inverness Castle and Bridge, mid 1800s. https://digital.nls.uk/pencilsoflight/searchDetail.cfm?startRow=1&totalRows=6&startRowNext=2&rowsPerPage=1&startRowBack=0&localArea=Inverness&country=0&photographer=0&keyword=0&highlight=0&talbotype=0&flag=1  This image shows Inverness Castle and its old bridge, which was washed away by a flood in 1849.

Homes for a Highland Town, c1950. https://movingimage-onsite.nls.uk/film/4145 This film shows poor housing conditions in Inverness in the mid twentieth century, and the new housing being built to try and alleviate these conditions.

Cromarty is a fishing village on the Black Isle, in Easter Ross. It was the birthplace of Hugh Miller, the geologist and writer, who recorded a local legend that a man called John Reid was granted three wishes by a mermaid, one of which he used to marry a local woman.

Cromarty, Scotia Depicta, 1804. https://digital.nls.uk/scotia-depicta/archive/74582376  This image shows Cromarty as it appeared at the beginning of the 19th century.

Statistical Accounts of Scotland, 1790s and 1840s. https://stataccscot.edina.ac.uk/static/statacc/dist/home  A full text digital archive of the detailed surveys made of each parish in Scotland by the Ministers of the Church of Scotland in the 1790s and the 1840s.