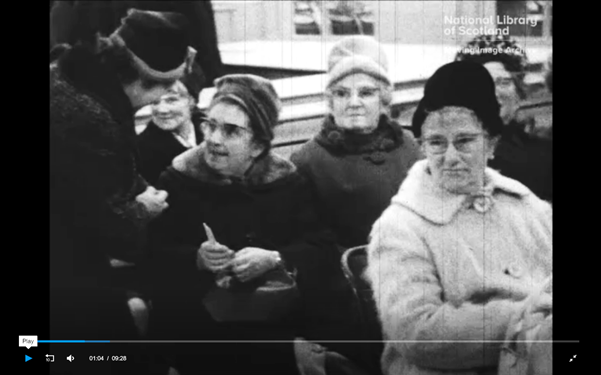 This short blog uncovers the story of Anchor Pensioners 1965, a recent addition to the moving image catalogue, and illustrates how public engagement is key to understanding some of the unique archival material in the Library’s collections.

The film came in to the archive a few years ago as a consequence of a house move.  Other than the information supplied by the donor (that the man who likely filmed it was a William Pattison) and the title on the film itself, which we assumed connects it to the Anchor Mill in Paisley, very little was known about it.  The fact the film was silent simply added to the mystery.

It was in relatively good condition, and technical staff at the Kelvin Hall were able to clean and digitise the 16mm black and white film safely for online viewing.  What next?

An initial summary was compiled:  ‘’Women arriving in a hall. They are greeted at the door and handed a programme.  General views of the women seated in the hall. More women arrive. Gv’s of the pensioners in the hall, a few men are also in attendance. Scouts arrive. Gv’s of those seated in the hall waiting as more people arrive. Girl Guides take coats. A nurse is also in attendance. Pensioners exit the hall for tea. Gv’s of pensioners seated a rows of tables for afternoon tea. The End’’

So far, so not very exciting!  Cataloguing audiovisual material can be a time consuming business, especially when there is so little accompanying information.  With the film dating from the mid 1960s it was likely someone could help us identify the film further, so we published it online and got in touch directly with the local community via various Paisley and Renfrewshire groups on Facebook.  Within a matter of hours, some fascinating detail about the film came flooding back, as well as the inevitable memories.

Examples of the feedback are:

The film is now coming back to life as it is shared online in the community and further afield.   It is no longer ‘general views’ of women taking off their coats and rain macs and sitting down to tea and scones, but a valuable record of the community and social traditions that formed around this important thread mill in Paisley.  The puzzle pieces are coming together!

In this interview, filmed for Renfrewshire Leisure, curator Ann Cameron speaks about why local community films remain important. Renfrewshire Leisure is also hosting Reel Life, a short festival that celebrates the image obsessed enthusiasts who have made a great contribution to local visual culture in Renfrewshire.

Find out more about how we document local films at the Library’s upcoming event Local Films Go Global: An Example from Aberdeen.

Explore a selection of films about Paisley and Zoom into Renfrewshire with the National Library’s digital collections.