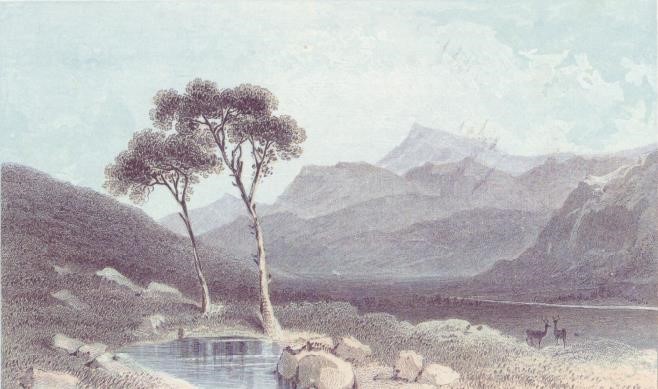 Modern Aberdeenshire encompasses historic Aberdeenshire, Kincardineshire and part of Banffshire.  To the south it borders Angus and Perth & Kinross, to the west Highland and Moray, and to the east Aberdeen City.

Traditionally the region’s main employment was in farming, fishing and forestry.  The oil boom prosperity spread out of “the City” and into “the Shire”. Today the energy sector, including sub-sea technology, along with their support companies, still provides many jobs.

There are small local collections held at branch libraries throughout the county, with the main collection being held at Library Headquarters in Old Meldrum.

“Kippers” filmed by Joint Production Film [Aberdeen Production Group], 1950 [In the Moving Image Archive] https://movingimage.nls.uk/film/1760 Peterhead got its nickname the “Blue Toon” through the colour of the fishermen’s knitted jerseys. The town is the largest Scottish port, so there were lots of blue jerseys around when the nickname was first coined. The pattern of the jerseys differed according to the home port of the fishermen.  Often the initials of the fishermen were worked into their jersey as well. Peterhead is the largest town in the county.

The Dee Valley, Maria and Michael explore, 1959. https://movingimage.nls.uk/film/0586 This lovely educational film shows the children travelling up Deeside, by boat, train and bus from the harbour at Aberdeen to Braemar.

The Hutton Drawings are a collection of over 500 drawings, maps, plans and prints relating mainly to Scottish churches and other ecclesiastical buildings.  A few depict castles or other secular dwellings.  These drawings date mostly from 1781-1792 and 1811-1820 and are arranged by county.  Some drawings are by George Henry Hutton, a professional soldier and amateur antiquary, who complied the collection. Volume One contains the drawings for Aberdeenshire.

Image of Abbey of Deer by George Henry Hutton.

A list of maps of the historic county of Aberdeenshire https://maps.nls.uk/counties/aberdeenshire.html

The following article from the Press and Journal describes how yellow fish were stencilled onto the ground beside drains in Stonehaven in an attempt to deter people from dropping litter down them and causing blockages. Hopes fishy goings on with drains will help to put off litter louts by Press & Journal, The (Aberdeen, Scotland), May 12, 2021, p22 [In Newsbank.com] Article can be viewed here after registering

Starting business in 2007, BrewDog has gone from strength to strength from their first building in Fraserburgh.  After only two years the firm became Scotland’s largest independent brewery.

Business for Punks : Start Your Business Revolution – the BrewDog Way by James Watt, 2015. https://search.nls.uk/permalink/f/sbbkgr/44NLS_NPLD_EBK017534536 [available within the Library only]

Aberdeenshire has a fine literary tradition.The Library holds the manuscript of several authors based in the county.

Nan Shepherd wrote her most famous book The Living Mountain about the Cairngorms, accessing them from her home on Deeside. Her novels are also set amongst the Deeside communities. Shepherd features in the Library’s latest exhibition, Petticoats & Pinnacles: Scotland’s pioneering mountain women. https://blog.nls.uk/tag/nan-shepherd/

A friend and correspondent was Jessie Kesson who had been moved to an orphanage at Kirkton of Skene and spent some time living in the county. https://wee-windaes.nls.uk/jessie-kesson/

Marchioness of Huntly’s Strathspey and Reel by William Marshall and Donald McDonald, 1814. https://digital.nls.uk/special-collections-of-printed-music/archive/102744635 [From the Glen Collection of Printed Music]

The Peat Fire Flame by Alasdiar Alpin MacGregor, 1937. https://digital.nls.uk/81148879 [From The Ossian Collection]. The story behind the Reel of Tulloch is related on page 189.

History of the family of Seton, by George Seton, 1896. https://digital.nls.uk/96852018 (see page 433 of the digitised version, page 973 of the book). The ghostly Green Lady of Fyvie is reputed to be Lilias Drummond who was locked in the castle by her husband Alexander Seton because she couldn’t give him a son and heir. Following a failed rescue attempt by her family, she starved to death.

Scenery of Braemar, Balmoral, Loch-na-gar, &c., Nelson’s pictorial guide-books, circa 1865. https://search.nls.uk/permalink/f/sbbkgr/44NLS_ALMA51591466920004341 Amongst the many castles in Aberdeeenshire, perhaps the most well known is Balmoral.  The original building was re-modelled by Prince Albert for Queen Victoria. The Queen’s love for the area and its mountains inspired many people to visit. Tourism is still an important industry to the whole region.

Aberdeen Angus by Campbell Harper Films Ltd, 1947 https://movingimage.nls.uk/film/0277 [Moving Image Archive] An introduction to the Aberdeen Angus cattle breed.  It is interesting to compare how the animals featured here, from 1947, compare to the breed standard of today. The beef from Aberdeen Angus is highly prized for its tenderness and flavour, caused by the meat’s natural fat marbling.

Field Marshal Sir Douglas Haig Talking to a Sergt. Major of the Gordon Highlanders Who Formed the Guard of Honour, 2005. [In Photographs of Haig] https://digital.nls.uk/74547040 A picture from our Earl Haig Collection of photographs from World War One showing soldiers from the local regiment for Aberdeenshire, the Gordon Highlanders.

Something about a county town

Inverurie, is the largest town in the county, recently overtaking Fraserburgh, after large scale development.  The area around Inverurie is known as The Garioch (pronounced “geary” as in the gears of a car).

Inverurie and the Earldom of the Garioch by John Davidson, 1878. [In Histories of Scottish Families] https://digital.nls.uk/95273703

Something about a small place

Huntly: capital of Strathbogie: the town of the tower and the linden tree by Cyril A. Barnes, 1998. https://search.nls.uk/permalink/f/sbbkgr/44NLS_ALMA21558720860004341  Huntly used to be known as Milton of Strathbogie, or just Strathbogie.