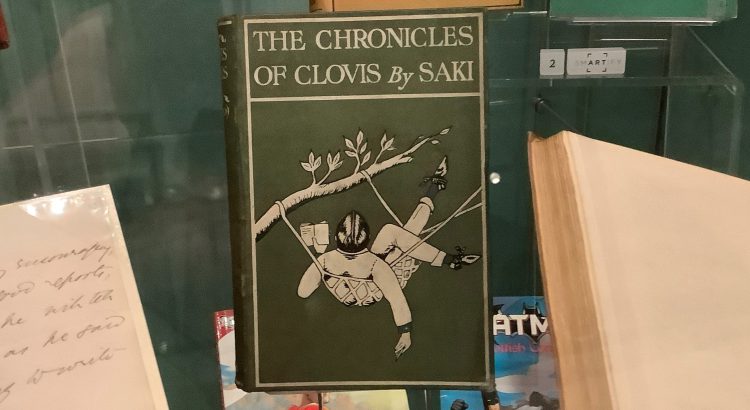 Our blog generally features short pieces on the Library’s collections and associated activities but as it is the holiday season we thought we would post a very short story. The story and its author are featured in our current exhibition “Pen names” which explores authors who publish books under assumed names. The author of the story is Saki, the pen name used by Hector Hugh Munro (1870-1916). Saki was a celebrated author of macabre and satirical short stories and an influence on A.A. Milne, P.G. Wodehouse, Roald Dahl and Will Self. The story is about novelist Augustus Mellowkent who on the advice of his publisher issues his books under the pen name Mark Mellowkent. In a few pages it arguably says more about the nature of pen names and the life of the writer than our whole exhibition, such is the power of a great short story writer.

Saki and this short story are featured in the Library’s exhibition Pen Names which explores a range of writers working in Britain from the 1800s to the present day who use pen names. The exhibition runs from 8 July 2022 to 29 April 2023. Learn more about Pen Names on our website. For more blog posts about authors who use aliases search #PenNamesNLS.