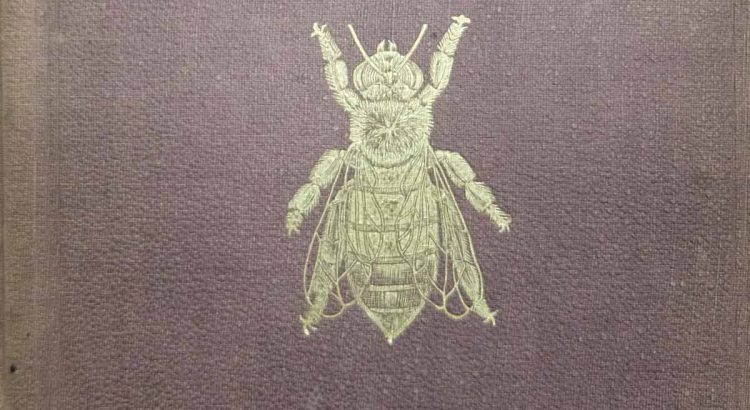 In the summer of 2021, a generous donation of beekeeping works was made to the Scottish Beekeepers’ Association (SBA) from the bookseller, John Kinross. After discussions with the librarian of the SBA’s circulating library held at Fountainbridge Public Library, it was decided that twenty-eight of the rarest and most valuable titles would become additions to the Moir Rare Book Collection. The Moir Rare Book Collection comprises the most valuable works on bees and beekeeping owned by the SBA and is on long-term deposit at the National Library of Scotland. Named after John Moir (1851-1940), the first librarian of the SBA, it is one of the very finest collections of rare beekeeping materials in the world.

The incorporation of these new titles enhances the collection’s holdings of important 19th century British and American works. Of the twenty-eight titles, six rare pre-1801 editions are valuable supplements to existing copies in the collection. The remaining twenty-two titles are entirely new additions. The ten titles featured below have the added value of also not being recorded in National Library of Scotland holdings.

Samuel Bagster Jr. (1800-1835) was the son of a publisher of Bibles and other religious works. The Management of Bees was his first work and remained in print until 1865. Bagster covers the natural history of bees and swarming, but the book is most interesting as a survey of historical methods for the management of hives and the development of what he called the “Ladies’ Safety Hive“.

Bagster’s wife had a constant fear of being stung so the Safety Hive’s architecture was designed to facilitate easy removal of honey without overly disturbing the bees.

Gilbert M. Doolittle (1846-1918) is widely considered the father of commercial queen-rearing. Born in upstate New York, Doolittle was the son of a farmer and began actively keeping bees at the age of 24. Doolittle was one of the most prolific writers on bees and beekeeping with thousands of his articles appearing in periodicals over a forty-eight-year span. Scientific Queen Rearing remains a classic work and is still used as a basis of reference for modern queen breeders.

Robert Huish (1777-1850) was a prolific author with a wide-ranging literary output which included novels, poetry, romances and works on natural history and historical topics. However, he is best remembered for his works on bees with his first book on that topic appearing in 1815.

Although the first book on beekeeping printed in the United States appeared in 1792, it was based on the work of Daniel Wildman, an Englishman who had published his Complete Guide for the Management of Bees in 1773. Thomas Miner’s American Bee Keeper’s Manual (1849) has the distinction of being the first comprehensive guide written specifically for American beekeepers.

Nutt’s goal was a method of extracting honey from the hive without destroying the colony itself: “humanity to honey bees” allowing greater profitability for the beekeeper. Nutt also patented what he called the “Nutt Collateral Hive” in which the bee boxes were arranged horizontally, rather than vertically as Nutt believed that making the bees climb vertically sapped their energy.

Moses Quinby (1810-1875) was an American beekeeper from New York State. He began beekeeping in 1828 and wrote and taught on the topic throughout his life. A devout Quaker, Quinby happily shared his knowledge and never patented his beekeeping inventions (such as the bee smoker with bellows) or copyrighted his books or publications. Sometimes referred to as the father of commercial beekeeping in America, he was president of the North American Beekeepers’ Association in 1871.

This work was first published in 1880 and contains much information which is still useful and practical today.

Simmins discusses how bees may be cultivated both as a means of livelihood and as a recreational pastime. The work includes a section on the health attributes of honey and its uses for the treatment of disease. Simmins was also instrumental in the design of what would become the British Standard Commercial Hive.

Taylor took up beekeeping to seek “occasional relaxation from weightier matters”. Following a friend’s request, he published the first edition of his Bee-Keeper’s Manual in 1838 as a succinct and practical handbook on the management of bees. The book was a success and went through eight editions.