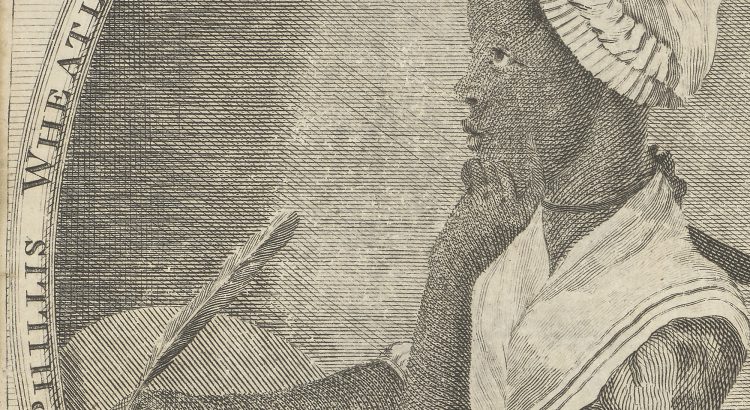 As part of Black History Month the Library has a display in the Special Collections Reading Room (SCRR) celebrating the work of Phillis Wheatley Peters.

Peters was a talented poet and believed to be the first Black American to publish a book of poetry. This blog will look at her life and poetry. Born possibly in Gambia or Senegal, she was kidnapped at the young age of just 7 or 8 and forcibly taken to America where she was sold into slavery to John and Susannah Wheatley in Boston. We do not know what her name was before the Wheatleys bought her. She adopted the surname of her enslavers and Phillis was name of the slave ship that took her to America.

In the home of the Wheatleys, she was taught English and began writing poems from an early age. She also studied the Bible and Greek mythology, both of which influenced her writing. Some of her later poems engaged with the political situation in America, as the country headed towards Revolutionary War.

The artist who produced the painting on which the final engraving was based is believed to be Scipio Moorhead — an enslaved man from Boston. The poem on display in the SCRR — ‘To S.M., A Young African Painter, On Seeing His Works’ — is dedicated to him. A celebration of the artist and human creative power generally, it draws on Christian ideas of heaven to portray art as a means to overcome restraints and achieve both freedom and immortality. Through art the artist can momentarily gain access to the divine and find inspiration and consolation in its beauty. Beyond death, the poem urges, both artists will find freedom in ‘nobler themes’, beyond the constraints imposed by their earthly lives.

While little else is known about Scipio Moorhead and no other paintings of his have survived, this poem carries the legacy of two Black artists who suffered through slavery and whose creative gifts we can experience today.

For the publication of her book, Wheatley travelled to Britain, accompanied by John and Susannah Wheatley’s son Nathaniel. During this time, she met several influential people including Benjamin Franklin, and saw the rising popularity of her poetry on both sides of the Atlantic.

This was a pivotal time in Britain because in 1772 (just one year before Wheatley Peters travelled to Britain) there was the Mansfield Judgement. The Mansfield Judgement stated that enslaved people from America who arrived in Britain could not forcibly be taken back to America, in effect freeing them. This gave Wheatley Peters power. She could stay in Britain and become a free woman. However, when Susannah Wheatley became sick, Phillis returned to America. She still managed to gain her freedom within the year.

In 1778 she married John Peters, himself a well-educated, free Black man. They tried to gain subscribers for a second poetry book by Wheatley Peters, however, they were unsuccessful in their venture and most of these poems seem to have been lost to time.

Despite the hardships, Phillis Wheatley Peters’ work lives on. As the display in the SCRR shows, Wheatley Peters’ poems from her 1773 book of poetry are still being published, studied and celebrated today almost 250 years later.