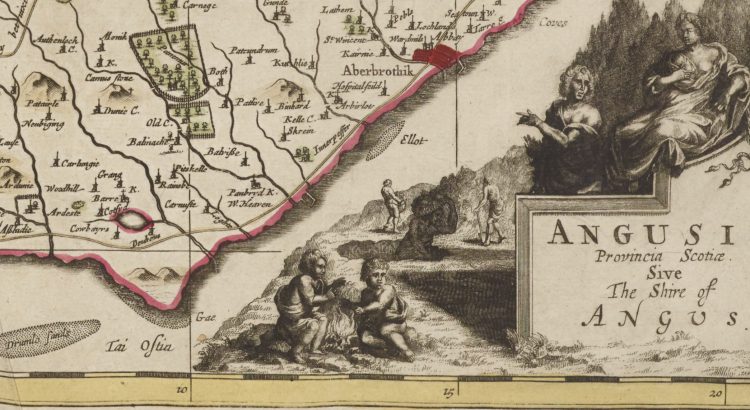 The Modern-day council area of Angus traces its name to an eighth century Pictish king, Óengus son of Fergus (ruled 732-761). Óengus (Angus) hailed from Circinn, one of the four principal Pictish kingdoms roughly coextensive with the modern county of Angus. The signing of the Declaration of Arbroath at Arbroath Abbey in 1320 marked Scotland’s establishment as an independent nation, and so Angus has become known as the birthplace of Scotland. The history of Angus runs deep, from the Pictish stones that can be found throughout the area, to Arbroath Abbey, the royal history of Glamis Castle, and the Bell Rock Lighthouse. Angus also has a rich agricultural industry and benefits from expansive natural beauty. The seven towns in Angus, each with their own unique character and attractions, are Arbroath, Brechin, Carnoustie, Forfar (the county town), Kirriemuir, Monifieth and Montrose.

Visit Angus has many resources for researching local and family history: https://visitangus.com/family-history/

A history of the Earls of Angus from the 12th – 19th Centuries. Fraser, William. The Douglas Book. [With Plates, including Portraits, Facsimiles and Genealogical Tables.]. Volume 2, Angus Memoirs. Edinburgh, 1885. https://digital.nls.uk/histories-of-scottish-families/archive/96532094

A History of the Family of Wise, or Wyse, who lived for centuries in Angus.  Rogers, Charles. Memorials of the Strachans Baronets of Thornton, Kincardineshire, and of the Family of Wise of Hillbank, Formerly Wyse of Lunan, in the County of Forfar. London: Privately Printed, 1873. https://digital.nls.uk/publications-by-scottish-clubs/archive/80583207

A film depicting the daily duties of the men working on the lifeboat at Montrose and the hazards they face. Glimpse of the lifeboat service (1930)  https://movingimage.nls.uk/film/0641

Amateur footage of daily life on the Lindertis estate in Angus. Scenes from a working farm (1957/1959) https://movingimage.nls.uk/film/9568

The Hutton drawing collection consists of over 500 drawings, maps, plans and prints relating mainly to Scottish churches and other ecclesiastical buildings. A few depict castles or other secular dwellings. Drawings date mostly from 1781-1792 and 1811-1820. Some drawings by George Henry Hutton, a professional soldier and amateur antiquary, who compiled the collection. The drawings are arranged by county, and the collection includes many from Angus. Here we have a watercolour of Arbroath Abbey, Angus, this painting shows the remnants of the main building. It says ‘5 July 1790’, and is identified as number 11. The red sandstone used in the construction of the abbey is quite distinct in this drawing. It came from the cliffs located in the north-east area of the town. The ruined towers probably formed the west end of the abbey’s nave. King William the Lion founded Arbroath Abbey in 1178. Initially set up for a group of monks of the Order of Tiron (an offshoot of the Benedictine Order), the abbey is famous as the location where the Scottish nobles signed the Declaration of Arbroath in 1320, which proclaimed Scotland’s right to self-determination.

From Records of the Parliaments of Scotland to 1707 (developed by the University of St Andrews): A full-text digital archive providing access to the original text and modern translations of the proceedings of the Scottish Parliament from the first surviving act of 1235 to the union of 1707. https://www.rps.ac.uk/

J.M. Barrie, the author of Peter Pan, was born in Kirriemuir, Angus on 9 May 1860. Discover J M Barrie is not the Library’s resource, but is an online archive that contains a plethora of primary and secondary source materials relating to the author’s life: https://jmbarrie.co.uk/

Jacob, Violet. Songs of Angus. 1915. https://digital.nls.uk/works-by-selected-scottish-authors/archive/129166908 Violet Jacob (1863-1946) was born into an aristocratic family who had lived at the House of Dun near Montrose since the 15th century. Her classic novel of the 1745 Jacobite rising, ‘Flemington” (1911), was highly regarded by John Buchan and is still in print. Jacob had a deep appreciation of the Angus dialect and countryside, and this is evident in her celebrated Scots language poetry in volumes such as ‘Song of Angus’ (1915).

A Castle and other historic building

Jervise, Andrew. The History and Traditions of the Land of the Lindsays in Angus and Mearns, with Notices of Alyth and Meigle. Edinburgh, 1853. https://digital.nls.uk/histories-of-scottish-families/archive/94869034

Walks and Hikes in Angus https://visitangus.com/walking-and-hiking/