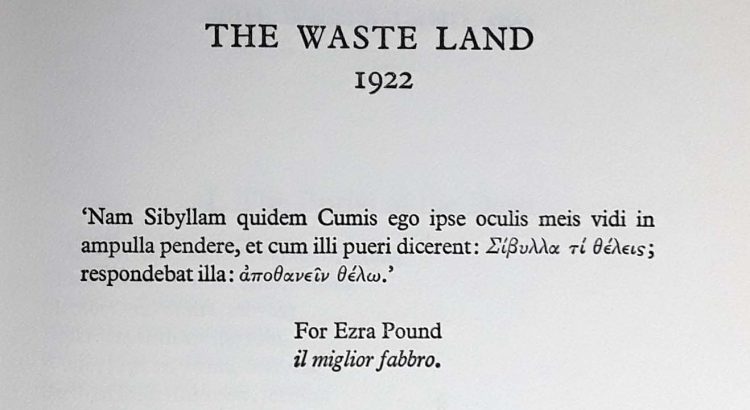 October 2022 marks the centenary of the publication of T. S. Eliot’s The Waste Land. Arguably the most influential poem written in English in the 20th century, it marked a turning point in modernist literature. Although the poem’s origins arose in the desolation of post-World War I Europe, its myriad themes still resonate today through their poetic exploration of societal and cultural fragmentation, desperate spiritual longing, and broken personal relationships characterized by loneliness, emotional disillusionment and sexual emptiness. Even the poem’s bisexual central figure of Tiresias seems prescient 100 years later in our age of gender fluidity.

The poem was first published in the premiere issue (October 1922) of The Criterion, a British literary magazine started and edited by Eliot.

The first appearance of the poem in the United States was in the November 1922 issue of the literary magazine The Dial. In December 1922, the poem was published in the United States in book form by Boni & Liveright, the first edition to print Eliot’s accompanying explanatory (and sometimes obfuscational) notes.

In September 1923, the Hogarth Press, a private press run by Eliot’s friends Leonard and Virginia Woolf, published the first UK book edition of The Waste Land in an edition of about 450 copies, the type handset by Virginia Woolf herself.

It is interesting to contrast the typefaces used in the early editions of the poem with the Albertus and Perpetua typefaces so closely associated with the later, widely published editions by Faber & Faber.

These early editions also have different takes on the first word of line 42, ‘Öd und leer das Meer’ (Desolate and empty is the sea), taken from Richard Wagner’s Tristan und Isolde. The facsimile of the original typescript drafts has the insertion of the line in Eliot’s hand and incorporating the correct umlaut.

The Criterion, Hogarth Press, and the first New York edition all have the nonsensical Od’. Interestingly, both the Hogarth Press and the New York edition (Boni and Liveright) had the type for the setting of the Greek section of the epigraph on the title page taken from the Satyricon of Petronius but possibly no type for an umlaut. The later authoritative Faber and Faber editions eschew the umlaut and transliterate to Oed’

The Waste Land: a Facsimile and Transcript of the Original Drafts including the Annotations of Ezra Pound. Rev. ed. (London: Faber and Faber, 2010). shelfmark: PB6.211.28/13