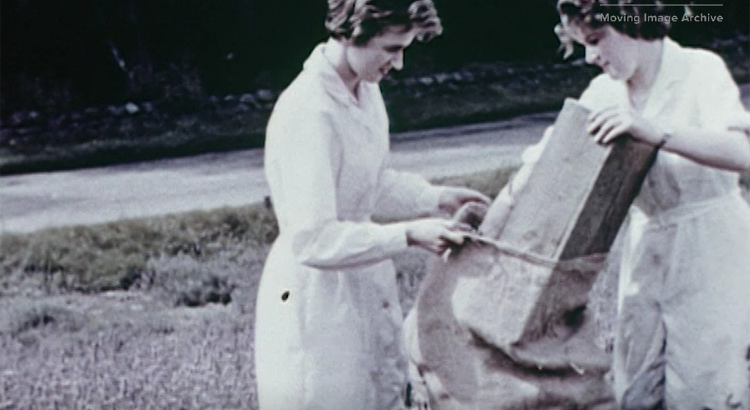 If you request an item from the Library’s archive and manuscript collections or stream a film through our website, chances are you’ll come into contact with the history of Scottish working people.

Whether it’s the crafting of materials for medieval manuscript illuminations, ledgers documenting the work of crofters, plans used by the builders of Scotland’s lighthouses, or the personal archives of politicians, as written by their secretaries, working people’s labour is captured throughout the collections.

The Moving Image Archive collection contains records of all kinds of industry – from shipbuilding to sweetie making. These date from the dawn of film in the mid-1890s to the present day. Audiovisual content about working people’s histories comes in many forms. These include professionally made documentaries; promotional and educational films; videos of activist marches, work-ins, and strikes; and a large body of amateur works. These were recorded on everything from 35mm nitrate film through to Betamax videotape and digital files captured during the coronavirus lockdowns.

The collection includes films of the Clyde shipyards in their heyday and in decline. There are records of mills, coal mines, locomotives and Hillman Imps. But the archives also capture the histories of Scottish rural industries such as fishing and farming. We even have films of lavender production on Deeside and Crabbie’s ‘Green Ginger’ on the production line. Moving image footage can convey both the toughness and danger of manual work as well as the beauty of it.

Meanwhile, the Scottish labour movement has been a major collecting area at the Library since the 1960s. Our Archives & Manuscript collection contains the largest group of records of trade unions, co-operative societies, and labour campaigners anywhere in Scotland. It includes the surviving personal papers of figures such as Keir Hardie and John Maclean. It features the archives of trade unions representing diverse occupations ranging from plumbers to painters, and miners to musicians. The Library holds the 18th-century account book and charter of the Fenwick Weavers, the world’s oldest co-operative society for which manuscript records exist. These archives have been built up in partnership with the Scottish Labour History Society and the Scottish Working People’s History Trust.

Our archives offer a rich body of evidence of workers – not only of their own experiences, but also how they were presented by others well as themselves. It’s also true that there are gaps and silences in the archives. As our recent blog on LGBTQ+ films in the Moving Image Archive points out, the creative output of certain communities is not always adequately represented in our collections.

Women’s work wasn’t typically the focus of the Library’s early collecting in this area, which concentrated on preserving the paper records of Scottish trade unions linked with the traditional, male-dominated heavy industries. We need to look outside our conventional ‘Labour History’ archive collections to find records of other forms of labour in Scotland, including women’s domestic labour. Documentary films, for example, have often been dominated by male voices, either in the form of the commentary speaker or the factory owner.

But dig a little deeper, look a little closer, and women are simply everywhere in the archives. As well as working in the home, they are on the production lines, in the factory, collecting tatties in the fields, performing skilled tasks in the mills or the electronics firms. They are teaching, nursing, and on the march demanding fairer rents and equal pay.

Looking ahead, we will be adding the Workers’ Stories Project to our collections. This online archive was set up in 2020 to capture the lived experiences of working people – including carers, those on precarious and zero-hours contracts, and those who worked in the home – during the coronavirus pandemic in Scotland.

And working lives aren’t just about work itself. The social lives, families, and local communities are all there to explore in our collections. Here’s some footage from Pullars of Perth, filmed during a works outing to the 1924 British Empire Exhibition in London. There are records relating to Crawford’s Biscuit Factory in Edinburgh: as well as instructional films (one title is ‘A Record of the Broken Corner’, where the broken biscuits went!) Such films feature the social activities of staff, including children’s Christmas parties.

If this blog interests you, come along to ‘Co-operative Collecting: Unions and the History of Working People’ at Kelvin Hall, Glasgow on Wednesday 12 October. The event features a selection of moving image and archival material from the Library’s labour history collections.